Posted by CREEK NEWS WEEKLY Posted on 2:05 PM with No comments 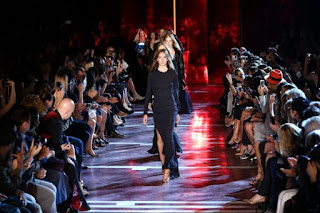 (AFP) The first 2015 spring/summer fashion week of the season opens in New York Thursday with designers pushing the boat out like never before and Ralph Lauren unveiling his collection in Central Park.
The week-long fest of glamor, style and celebrity endorsement will see frenzied fashionistas high-tail it across the city, squeezing in more than 270 back-to-back shows from morning until night.
Dominated by big US designers led by Marc Jacobs and Alexander Wang, emerging talent from Europe, Asia, Russia and the Middle East will snip at the sidelines, hoping for their big break.

Around 30 small shows have already been held, often chances for emerging designers to make their first big American splash -- such as Russia's Alina German and Israeli-born Daniel Silverstain on Wednesday.
Among the most hotly anticipated collections are that of Britain's Gareth Pugh, who has deserted the Paris catwalk in favor of New York on a one-time basis only.
Aged 32, he has promised an "immersive live experience" of dance and video.
Never short of imagination, Opening Ceremony is also pushing the boundaries, presenting its collection on Sunday in the form of a 30-minute play co-written by actor Jonah Hill and Oscar-winning director Spike Jonze.
Tommy Hilfiger has promised an "exclusive digital program" on September 8 and Ralph Lauren is to unveil his Polo collection in Central Park, a first.
The enfant terrible of American fashion, Jeremy Scott, is expected to team up with pop star Miley Cyrus, the queen of publicity and veteran of racy stunts.

After New York, the fashion set will decamp to London, Paris and then Milan, but Diane von Furstenberg, president of the Council of Fashion Designers of America, sees a unique allure this week.
"What does New York mean? It means everything is possible, it means 'diversity', a side that is a little more commercial, but another side that is much more open," she told AFP.
President of the CFDA for the last eight years, she said she was excited by the wide number of young, interesting designers showcasing their work in New York.
"I am very proud," she told AFP. "When I look back, we have made a lot of progress. We have a lot of American designers who have become international designers, therefore I am very proud of American fashion."
With the onset of Twitter and Instagram, fashionistas are ever more impatient and BCBG has promised that select pieces will be available for purchase via Instagram and a phone app immediately after its runway show.
Other names that will draw huge crowds are Proenza Schouler, Vera Wang, Michael Kors, Calvin Klein, Victoria Beckham, Rodarte, Prabal Gurung, Carolina Herrera, J. Mendel, Oscar de la Renta, Jason Wu, Altuzarra and Donna Karan.
Inspirations promise to be as diverse as ever. Von Furstenberg said it was the French Riviera. For Michelle Obama favorite Jason Wu, it's beauty; and for Peter Som, juxtaposition.
Barcelona label Desigual, celebrating its 30th anniversary, has been inspired by flowers in an imaginary garden, Tadashi Shoji by Venetian Gothic palace Ca' d'Oro; and Monique Lhuillier by the sunrise.
But it is not just art. The fashion industry is an economic lifeline in New York.
Mayor Bill de Blasio on Wednesday described the Big Apple as "the fashion capital of the world," that is headquarters to more than 900 fashion companies, employing more than 180,000 workers on salaries of $11 billion a year.
Nearly 230,000 people are expected to pour into the city for the event, which de Blasio said would earn the city nearly $900 million.
The first formal show is Nicholas K, inspired by the Sahara, at 1300 GMT followed by BCBG at 1400 GMT.
RELATED POSTS
Tag : FASHION