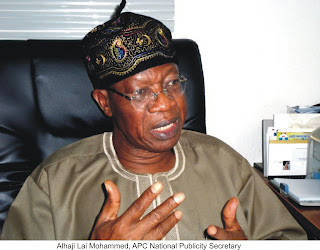 The ruling All Progressives Congress (APC) has described as spine-chilling and mind-boggling the massive looting of the nation’s treasury by public officials, saying nothing but the total recovery of the funds will be acceptable to all patriotic Nigerians.
In a statement issued in Lagos on Sunday by its National Publicity Secretary, Alhaji Lai Mohammed, the party said anyone who attempts, either by deeds or words, to sabotage the recovery efforts is not a patriot and deserves nothing but public opprobrium.


It therefore thanked Nigerians for their overwhelming support for the Buhari Administration in its tough but important task of tracing and recovering the loots, while also ensuring that the looters face justice.
”It is absolutely gratifying that Nigerians are vehemently opposed to the few who would rather have the government of the day turn a blind eye to the looted funds and, in their words, carry on with the process of governance.
”Truly, what sort of governance can go on if the billions of Naira in a few hands are not recovered? In the first instance, the government needs every kobo of the funds it can muster to bring about the change it has promised Nigerians.
Secondly, leaving such hair-raising funds in the hands of the few looters is dangerous, because they can use the funds to destabilize any government. In fact, no one will be surprised if the looters use their dirty funds to sponsor public demonstrations against the government’s determination to recover the funds.
“Thirdly, allowing those who privatized the commonwealth to get away is offering a thumbs-up for looting. No responsible government will do that,” APC said.
The party said that already, the looters have embarked on a relentless and an increasingly-bold campaign to discredit the government of the day and sabotage the funds’ recovery process, using newspaper columnists, ‘talking heads’ and otherwise respectable opinion leaders.