Posted by CREEK NEWS WEEKLY Posted on 2:22 PM with No comments 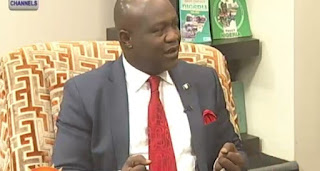 An Abuja based economist, Katch Ononuju has referred to the appointment of Ahmed Kuru as the new boss of the Asset Management Corporation of Nigeria, AMCON, by President Muhammadu Buhari without the scrutiny of the Senate as a sign of his “Military Hangover.”
He also said the AMCON act directs him to seek the approval of the National Assembly before Kuru’s appointment.
In an exclusive interview with POST NIGERIA, Ononuju stated Buhari’s inability to read the handover note by the former administration could be responsible for the latest flaws in his appointments.
“We are just experiencing some of Buhari’s military hangover in his appointments.
“Buhari, because he did not read his handover notes, continues to make mistakes. The AMCON boss would need a confirmation from the Senate before he is appointed. We need to look at the character of the man he is bring to AMCON.
“The mistake Buhari made was that he brought an insurance commissioner to AMCON, and this insurance commissioner turns out to be a man who was involved in the old insurance problems.
“The process allows that he must be confirmed and go under public scrutiny before being appointed. Before those people would go into office, they must be confirmed by the Senate.”
Several legislators have also criticized Buhari for subverting the powers of the legislature in Kuru’s appointment as a replacement for the erstwhile boss, Mustapha Chike-obi.
The replacement is a clear breach of the AMCON Act 2010 which clearly stipulates that such appointments by the President shall be subject to the confirmation of the Senate.
Pointblanknews.
RELATED POSTS
Tag : NEWS