Posted by CREEK NEWS WEEKLY Posted on 4:34 PM with No comments 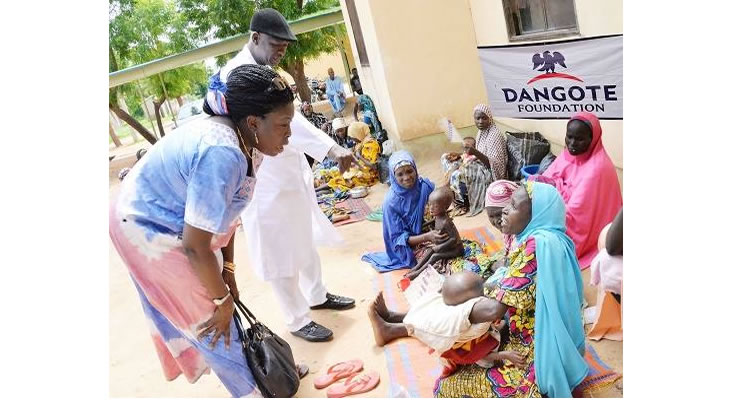 In continuation of its efforts aimed at creating wider access to healthcare for less privileged Nigerians, Dangote Foundation at the weekend tookfree health care services to the door steps of the vulnerable and poorones in Katsina state.
Thousands of ailing people, including sickly elderly and malnourishedchildren alike trooped out to the General Hospital in Kankia LocalGovernment area of the state, venue of the exercise and were treated free.
The free medical outreach in Katsina State include: Free consultations,medicines and minor operations; advocacy on health and nutrition to women;as well as training of interns and medical personnel who in turn wouldoffer medical advises to the people.
The programme which was spearheaded by Dangote Foundation was incollaboration with the Katsina State Government; Give-Back Nigeria, a UKbased Charity Organization and Gachi Development Foundation.
The state governor, Aminu Bello Masari, who flagged off the three-daymedical services expressed appreciation to the Dangote Foundation and itscollaborators for the gesture and described it as a service to humanityfor which God would surely reward.
He explained the programmes being mapped out by his admninitsratiuon totackle health care challenges among his people and said the DangoteFoundation has in no small measure assisted in quickening the healthprogramme.
The governor urged other spirited organization to look in the direction ofjoining hands with government to ensure the poor also have access toquality health care services.
In her remark, the Chief Executive Officer of the Foundation, Mrs. ZoueraYoussouffou said the Foundation decided to sponsor the free medicaloutreach because the health sector is a critical part of the Foundation’sfocus in contributing to the upliftment of the society and her people.
She stated that issues bordering on the health of Nigerians have alwaysbeen of concern to Dangote Foundation and that was the reason it has beeninvolved in all efforts at ensuring poor Nigerians also benefit from soundhealth care services.
“We were very active in the fight against the dreaded Ebola and jointly wedefeated it. So also we mounted a lot of campaigns to see that polio waseradicated. We are happy that today, one year down the line no single caseof polio has been recorded.
“This goes to show that collectively we can eradicate most of the diseaseravaging our people if we deploy the will. We in Dangote Foundationbelieve that health is wealth, and economic activity can succeed when thepeople are sick”, Youssouffou noted while adding that the Foundation wouldcontinue to support Nigerian government and the new Katsina stateadministration.
Dr Shamsudeen Yahyah, a Director in the Ministry of Health of KatsinaState, urged all the contributing agencies to try and sustain suchgesture, adding that their support will go a long way in assisting thegovernment in achieving its goals. He identified poverty, ignorant as themajor causes of diseases in the Northern part of the country.
Speaking also Dr. Tasiu Suleiman Gachi, the Project Leader said he wasimpressed by the Dangote Group and other organizations.
It would be recalled that the new initiative was coming after the DangoteFoundation in association with Bill and Melinda Bates Foundationintervened in the fight against polio thus leading to the eradication ofthe disease with news that no case has been recorded in Nigeria in thelast one year.
Over the years the Dangote Foundation has injected huge amount of money tothe development of the health sector in the country. It is currentlyconstructing N440million State-of-the-Art Theatre and Diagnostic Centre atthe Murtala Muhammad Specialist Hospital in Kano.
The Foundation has also disbursed about 600million in the last three yearson Routine Immunization and Primary Healthcare in Kano State alone, aswell as the construction of 11 units of primary health care centres across11 Local Governments.
RELATED POSTS
Tag : LIFE AND STYLE