Posted by CREEK NEWS WEEKLY Posted on 3:28 PM with No comments 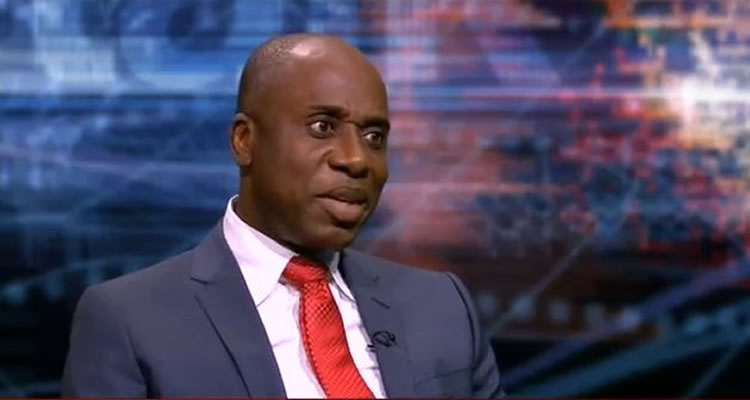 The Rivers State Chapter of the Peoples Democratic Party, says the recent
claim by the former Governor of Rivers State, Rotimi Amaechi, that he left
behind as balances in the State Internally Generated Revenue (IGR) account
with some banks in the State a total of N7.5billion does not go down well
with the Party, as there was no such amount in the State treasury on
assumption of office by the current administration of Governor Wike on May
29, 2015.
The PDP describes Amaechi’s claim as false, unfounded and indefensible,
pointing out flaws, inconsistency and uncertainty in the former Governor’s
statement where he said he left a total of N7.5billion “but by the time
you pull all these (accounts) together, we are looking at readily
available cash in the region of eight to ten billion naira left for the
Wike administration”.
The Party in a statement signed by Jerry Needam, Spokesman to the Chairman
of the PDP in Rivers State reiterates its position that the former
governor stole billions of Dollars and looted assets belonging to the
State, some of which he used in funding the activities of the All
Progressives Congress, APC, and also lodged in several of his private
foreign accounts.
Supporting its argument, the Party calls the attention of the public to
the recent revelation by the Bancorp Bank, Minnesota, United States, in
which it has communicated to the Nigerian Government an alleged $757
million Dollars (N80 Billion) domiciled in an account in Amaechi’s name by
one of Nigerians banks, explaining that the Minnesota bank intends to
return Rotimi Amaechi’s loot, which was part of the stolen funds by the
former Governor, who in the letter is described as the most corrupt
Nigerian Governor.
The Bancorp Bank letter to President Buhari stated that the said transfer
to both banks in Minnesota and Switzerland were for the purchase of
security Helicopters, spraying of Mosquito insecticides and for the
purchase of a residence for Mr. Rotimi Amaechi in America.
Not done with the above instances, the PDP further explained that Rivers
State was bankrupt under Amaechi, even when he was receiving about Six
billion Naira monthly as IGR, demanding answers from Amaechi on why he
could not pay Civil servants, Pensioners, TIMARIV workers, Students’
Scholarship, Contractors, Teachers at the Nne Krubo Model Secondary
School, Eleme among others, for several months when he still had the said
amount he claimed he left in the State’s treasury.
It is on record that the former Governor admitted that Rivers State was
broke and that “there was nothing for Wike to work with because the State
was broke”.
Expressing concern why the long delay in making his claim public, the PDP
challenges the former Governor to substantiate his claims and to a public
debate if he would be taken seriously.
The PDP therefore, calls on the public not to believe the concocted and
fallacious claims of former Governor Amaechi, as there was no such amount
left behind by his administration that even deliberately refused to
collaborate or have an interface with the May 29 Transition Committee on
Governor Nyesom Wike, adding that there are enough evidence on several
corrupt actions and the monumental looting carried out by Chibuike Amaechi
and his aides, which must be recovered.
RELATED POSTS
Tag : NEWS