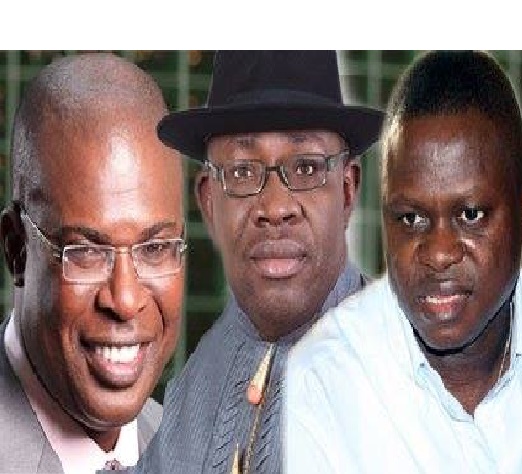 Now that the much awaited APC governorship primary has come and gone with Chief Timipre Sylva declared as the winner, the battle line is crystal clear between the incumbent Governor Dickson and Chief Sylva. Who wins?
This is the second coming of Chief Sylva as governor while the incumbent is seeking second bid in office under the platform of the PDP.
The political structures of the two governorship candidates are quite impressive although the APC is not as strong as the PDP in spite of the defections experienced by the PDP in the state.
To some, the defections which could be seen as a boost to the APC’s voting power but it may turn out to be the minus for the APC following the events surrounding the unpleasant primaries held on September 22, 2015 at the Sampson Siasia Stadium in Yenagoa.
There was Chief Timi Alaibe who is believed to be one of the favorite aspirants is being booed and rejected by the delegates of Sylva whom they believed built the party from scratch to limelight while Alaibe a neophyte. Therefore he was denied to fly the party ticket for the December 5, 2015 election in Bayelsa state.
This might be a powerful blow against the APC chances of ruling the state tentatively on February 12 2016. Implications are that loyalists and supporters of Alaibe may change their mind to  give sympathy vote to Dickson since their hopes were dashed at the primary by Sylva’s men.
Investigations revealed that Sylva’s first outing is not to be compared with Dickson’s performance so far  in spite of Dickson’s allege arrogance, disrespect of elders and his negligence of advice should the need arise.
Sylva’s sin is that he failed to construct the road leading to his kinsmen. They will long remember this singular blunder by him but yet he’s coming back again. This time, he’s a flag bearer of the APC.
Investigations also revealed that Governor Dickson is like the prodigal son who returns home after squandering his daddy’s piece of dime. He made little irreconcilable banters with his friends who brought him to power who later turn against him. But as providence have it, they have reconciled with him, thus former president Jonathan and his wife and Senator Amange declared support for him in the forth coming Bayelsa governorship election on December 5, 2015.
A random sampling embarked upon by this tabloid showed that come December 2015, Governor Dickson will beat Sylva but if his party has chosen Alaibe, victory is of APC. But a defector to APC, Chief Rufus Abadi who was one time chairman of PDP never agrees with this view. He predicts victory for APC because in the first place, the incumbent governor warranted the defections to take place.
It could be recalled that there is apparent anxiety among the PDP chieftains and supporters that APC may use federal might to subdue the incumbent governor although this allegation is yet to be clarified as at press time..