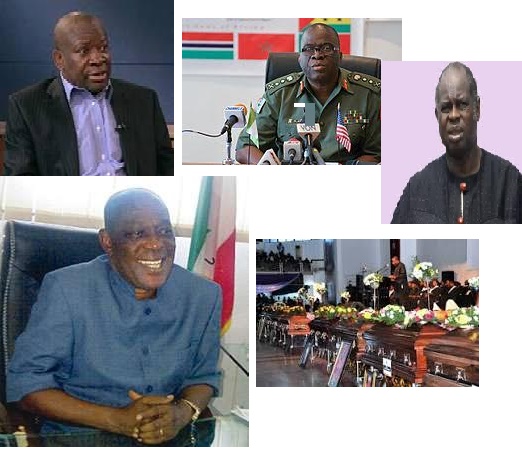 Death, one of the deadliest aspects of life has cheated Bayelsa big time leaders than ever before this year since the state was created in 1996.
This is coming at a time the new state would have consolidated the gains democracy by their vast wealth of experience to move the state forward for the younger generation to emulate.
Investigations by this news medium show that several budding great leaders have given up the ghost in the last four years of Bayelsa existence that cast gloom at the faces of the people.
The latest and the saddest is the passing away of Chief DSP Alamieyeseigha on the October 10, 2015. He’s said to have died from diabetes and other complicated diseases in a Port Harcourt Hospital.
Born 63 years ago in Amassoma, Chief Alamieyeseigha was the first executive Governor of Bayelsa state until 2005 when he was impeached by the state house of Assembly for allege money laundering and other corrupt charges. However, he was pardoned by former president Goodluck Jonathan and he became an inspiration to several upcoming politicians of the state even though some never believed in this school of thought. He had trodden the political hemisphere like a colossus to the extent that he was at one time call “The Governor General of the Izon Nation”.
In one of the condolence registers in the state capital, it is written that late Chief DSP is loved by all and sundry in Bayelsa state and if he’s to contest any election, he will automatically win. His support for the incumbent Governor Dickson has no bound before his death. He’s a blow to the incumbent governor’s campaign organization. Bayelsans, doubtless, is to miss this popular political leader of repute.
Death also cheated top Bayelsa women on February 14, 2015. Creek News Weekly gathered that the accident occurred in Ahoada on the East-West Road in Rivers State. It gave the names of others who died in the accident to include Consider Amadi, a former Woman Leader in Ogbia; Clara Abila, a grassroots politician; Immaculate Amasimua, a former Commissioner in the Bayelsa State Civil Service Commission; Zimbra Goma, a former Commissioner for Women Affairs in Bayelsa State; and Hon. Ruby Benjamin, a former member of the House of Assembly representing Brass Constituency 1 of Bayelsa State.
They were said to be returning from Port Harcourt in Rivers State where they had gone on a visit to Mrs. Jonathan. The Sector Commander of the Federal Road Safety Commission in Bayelsa State, Vincent Jack, confirmed the development. Jack spoke with newsmen on the telephone on Sunday. He, however, said only nine persons died in the fire that engulfed the vehicle in which the victims were travelling.
The accident was said to have occurred when the tyre of an oncoming Toyota Sienna exploded and the car rammed into the bus carrying the women. The bus burst into flames immediately. The coaster bus in which the women were travelling was said to have bore the inscription: “Women For Change Initiative,” Mrs. Jonathan’s Non – Governmental Organization.
So shocking was the death of the Special Adviser to President Goodluck Jonathan on Research, Documentation and Strategy, Oronto Douglas. Aged 49, Douglas died on Thursday, April 9, 2015 from cancer-related complications He reportedly passed away at the State House Clinic in Abuja.
Douglas, also a close confidant of the President, was said to have been shattered by Jonathan’s loss at the March 28 presidential elections .He is survived by a wife and children.
He was diagnosed with cancer in 2008 and had been battling the disease since then with “encouraging signs” of improvement, family sources told The Cable.
At some stage, he was thought to have survived as the cancer went into remission, but he suffered a relapse in 2011. Last year he was visibly sick, losing weight dramatically and sometimes needing a wheelchair to move around. In March this year Douglas travelled to the USA for his regular check-up and was told by his doctors that he could not survive further medication.
Mr. Douglas came to national and international prominence as an environmental activist on behalf of the oil-producing communities of the Niger Delta. A lawyer by profession, the deceased was born in 1966..
Another great Bayelsa that death cheated is Azazi. On 15 December 2012 Azazi died along with Governor Yakowa of Kaduna state in a naval helicopter crash in Okoroba Village of Bayelsa State while on their way back to the Port-Harcourt Airport from the funeral of Oronto Douglas's father.
Azazi had for some time had one of the fastest growing military careers in the history of present day democratic Nigeria, between May, 2006 and June, 2007 the General had worn the ranks of Major General, Lieutenant General and General

And of course the death the former Chairman of the Peoples Democratic Party (PDP) in Bayelsa State, Sam Inokoba on September 2, 2015 in Lagos aged 68.

The cause of his death is still in doubt as while some reports claim he died of food poisoning, others say he had a heart attack.
Fears as to the state of Inokoba’s health had earlier arisen after he allegedly slumped during a town hall meeting in Nembe, Bayelsa State on August 22.
The former PDP chairman defected to the All Progressives Congress (APC and had plans of contesting the December 5 governorship elections in the state on the ruling party’s platform.
His corpse has reportedly been deposited at the Military Cantonment Hospital in Port-Harcourt.