Posted by CREEK NEWS WEEKLY Posted on 12:05 PM with No comments 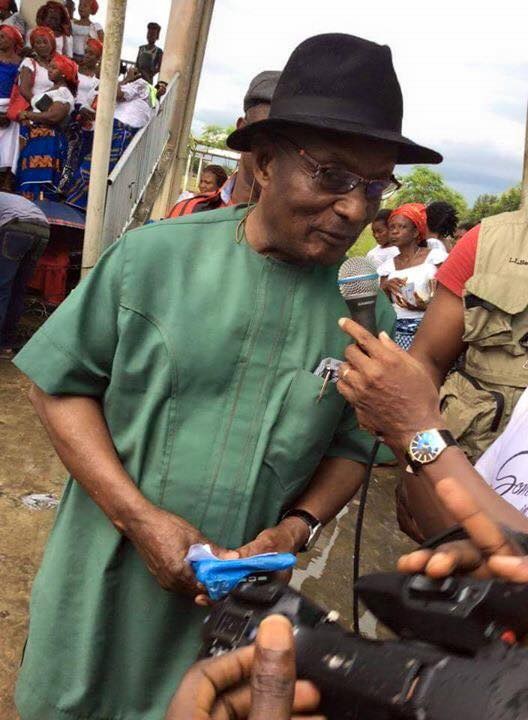 The political hemisphere in Bayelsa state takes a new turn in Yenagoa when the Authentic APC delegates had gone back to pitch tent with their former party, the PDP.
This is coming on the heels of an appeal by the Bayelsa state governor Chief Henry Seriake Dickson who declared that he‘s ready to open his hands to receive back all the PDP defectors to  its party’s fold.
Creeknewsweekly.com gathered that true to type, more that 1,000 delegates who were also ward officers of APC at different local governments areas of the state converged at the Peace Park to declare their support for the PDP in Bayelsa state.
Governor Dickson who spoke at the thunderous and rainy ceremony is of the view that the APC whom he considered to get 5 per cent of the total vote to be cast at the December poll may not get that percentage as all the defectors will vote for the PDP.
One of the prominent defectors Senator John Braimbayefa who spoke to Creeknewsweekly.com said his reason to return to the PDP is hinged on the lack of internal democracy by the APC.
He said the change mantra purported to have claimed by the APC is actually not true which several defectors thought is genuine but it is rather worse than the PDP.
Creeknewsweekly.com investigation showed that this latest political development towards the December 5, 2015 governorship election sounds contrary to what APC minister from Bayelsa state, Senator Heineken Lokpobiri has said recently in Yenagoa that the APC will get 95 per cent of the total votes in Bayelsa East senatorial district which is made up of Sagbama/Ekeremor local government.
It is gathered that almost all the U-turned defectors were top political gladiators from the Bayelsa East senatorial district where the minister had predicted victory for the APC at the poll.
A Yenagoa based business woman who hails from Bayelsa East who spoke on condition anonymity is of the view that the latest political development is probably a major boost to Governor Dickson’s stake at the forth coming governorship poll, adding that she commended the guts of the returnees to the PDP having discovered the false claim of change by the APC.
However, the APC Authentic Delegates return to their former party is unconnected with Timi Alaibe’s withdrawal from the Party’s primary election which Sylva became the flag bearer, she added
Meanwhile both the PDP and APC have intensified their campaigns throughout the state for the dicey December 5, election.