Home » Unlabelled » Forum calls for the redeployment of DIG

Forum calls for the redeployment of DIG

Posted by CREEK NEWS WEEKLY Posted on 4:22 AM with No comments 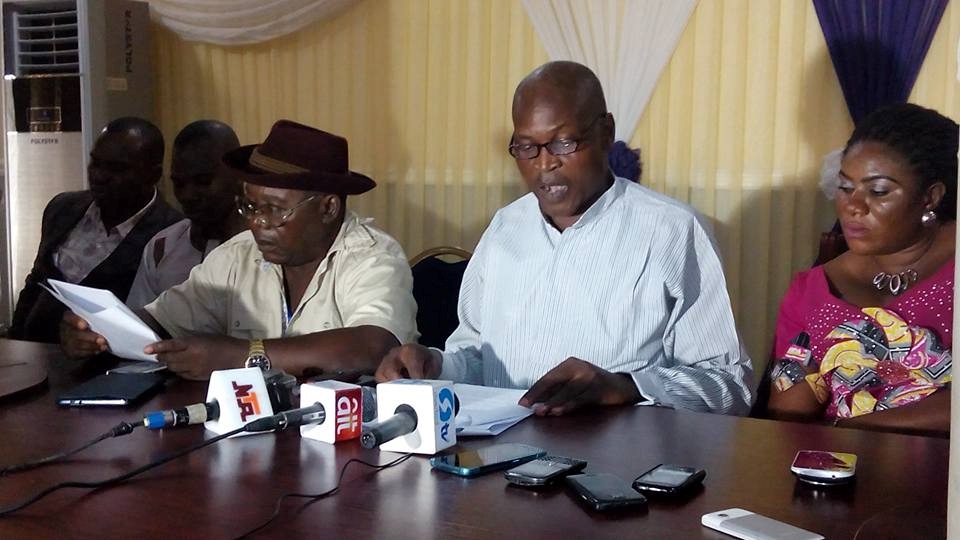 The United Governorship Forum for Credible Election has called for the redeployment of the Deputy Inspector-General of Police, Hashimu Argungun.
Not only him, the forum would want the transfer of the Bayelsa state Commissioner of Police, Nariru Oki from the state.
The leader of the political group, Mr. Williams Berezi made this call while addressing newsmen in Yenagoa over the outcome of the Bayelsa state governorship election on December 5, 2015.
According to him, the activities of the two persons showed extreme level of bias in favor of APC, adding that further participation of these men in the proposed re-scheduled election will not only  lead to a repeat performance of fraud at Southern Ijaw Local Government Area of the state.
Mr. Berezi also expressed fear over the presence of soldiers in SILGA who were deployed to provide security for the election.
He said that these soldiers were used by the APC to hijack electoral materials including some unscrupulous INEC officials to rig the election in seven wards in Southern Ijaw local government, noting that they should be withdrawn.
To ensure free, fair and credible election, the forum leader further stated that INEC should jettisoned the election materials used on December 5, 2015 and new materials should be deployed to conduct the fresh poll.
This, he said, has become imperative as there is likely hood that the APC thugs will use them during the proposed fresh election.
The forum also called upon President Mohammadu Buhari to immediately check the undue interference of his aides such as the Secretary to the Government of the Federation (SGF), Minister of Defence and Director-General of DSS because they were the unseen hands who manipulated the election process, adding that he should wake up as the country is gradually sliding into a collapse democratically.
However, the forum call on all Bayelsans to remain steadfast in the face of provocation, abuse of office and electoral corruption believing that the activities of the Southern Ijaw Local Government election was dangerous act capable of further throwing Bayelsa state into unnecessary turmoil, killing and maiming because some individuals wanted to be in power at all cost.