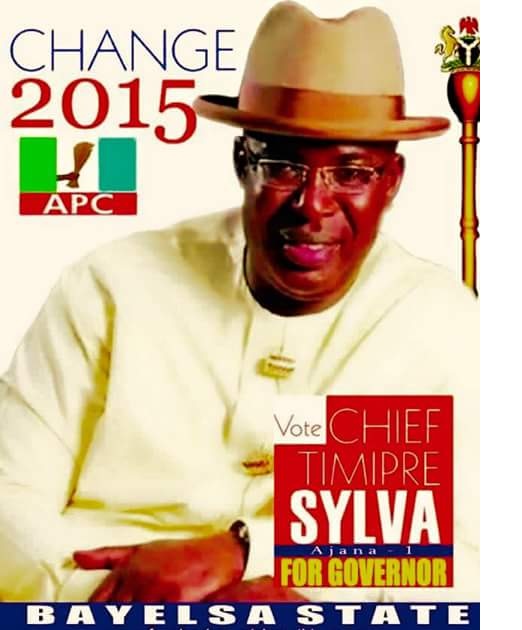 Some of the political parties that contested the Bayelsa governorship election have urged former Bayelsa state governor Chief Timipre Sylva, the All Progressives Congress (APC) candidate to accept defeat.
Mr Prince Elema, the Chairman of the political parties, gave the advice during a news conference organised by the parties in Yenagoa on Monday.
The political parties include Kowa Party, All Progressives Ground Alliance (APGA), United Peoples Party (UPP), and ID Party, among others.
The News Agency of Nigeria (NAN) reports that Sylva lost to incumbent Gov. Seriake Dickson, in the electoral contest.
The Independent National Electoral Commission (INEC) had declared the Dec. 5, 2015, governorship election inconclusive and fixed the supplementary election for Saturday, Jan. 9.
Elema said that Sylva’s acceptance of defeat would promote peace and understanding among the people of the state.
“We are advising the APC candidate to accept the results and join forces to move the state forward.
“We are satisfied with the conduct of the whole election in the state and hereby endorse the results and accordingly, hereby congratulate the winner, Gov. Seriake Dickson of PDP.
“We equally commend INEC efforts in the distribution of materials and providing a level playing ground during the election.
“We should come together as one people and move the Ijaw nation forward, ” Elema said.
Meanwhile, Sylva has expressed dissatisfaction with the results, saying that he would contest it at the election tribunal