Home » NEWS » In Bayelsa: No green light to end payment of loans, bonds

In Bayelsa: No green light to end payment of loans, bonds

Posted by CREEK NEWS WEEKLY Posted on 7:27 AM with No comments 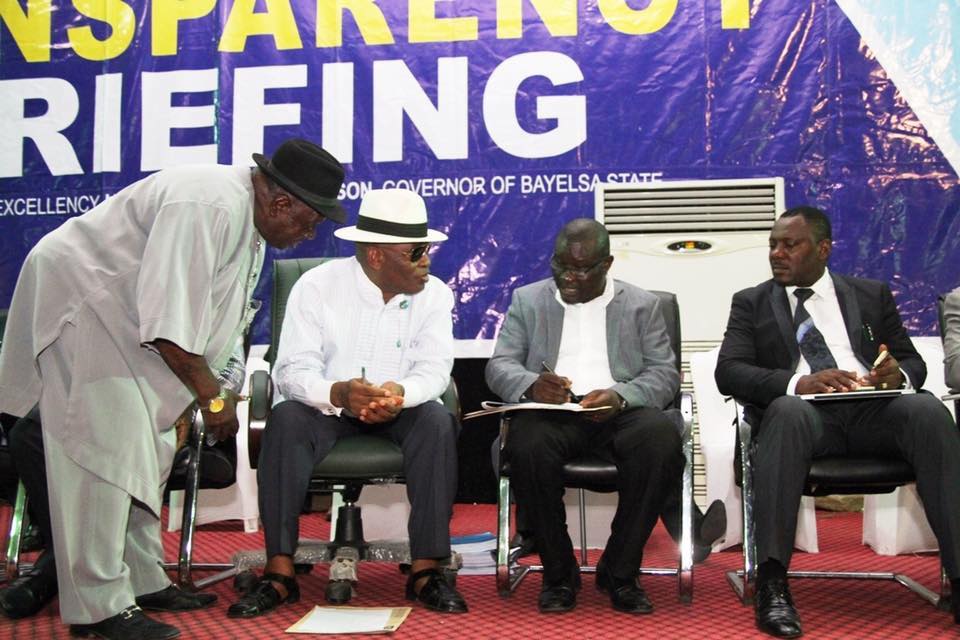 If what Bayelsa state deputy governor Rear Admiral Gboribiogha John Jonah (rtd) said at the state monthly transparency briefing is anything to go by, then there is no green light at sight to end the payment of loans and bonds obtained by the state government.
Fielding questions from journalists, the deputy governor hinted that the state government has continued to pay debts in form of bank loans and bonds since they came on board in 2012.
These repayments of loans and bonds span from previous administrations till date as government is regarded as a continue process no matter what, he observed.
He also said that frequent deductions from the state monthly allocations reoccur following previous overpayments made to Bayelsa state from oil wells re-allocated to neighboring states, adding that these repayments doubtlessly has made the state allocations to decline to zero point recently, he said.
According to the deputy governor, Bayelsa state government has paid billions of naira to bring down the state debt profile but daunting challenges remain unabated.
As a result, he revealed that the state government used bank loans to argument the payment of salary till January 2016 after the restoration government savings were exhausted.
For instance, the state allocation for February 2016 was N6billon but after deduction from sources, it slides down to N1.6 billion and, this amount is inadequate to pay workers in spite of the presidency’s directive that bailout funds for the month of April, 2016 should not be deducted nationwide to enable states to stabilize.
He said the state government received N1.6million for month of March 2016 but when loans and bonds were deducted from the N1.6billion by banks, only N100million was left.
To this end, he said, he met with the state chapter of NLC and shared ideas on how the remaining N100million would be used to pay salary.
The deputy governor advised civil servants and other stakeholders in the state to exercise patience as government is doing everything possible to pay salary.
Going by what the deputy governor explained, it has become obvious that payment of workers salary in the state still look gloomy.
Meanwhile, when the state government is finding it difficult to pay salary of workers, Governor Dickson’s ex-SA on MDGs Mr. Embeleakpo Apere is been interrogated by the EFCC for diversion of N800million meant for the MDGs. His wife is also under interrogation by the same anti-graft agency for N200million money laundering.