Posted by CREEK NEWS WEEKLY Posted on 8:43 PM with No comments 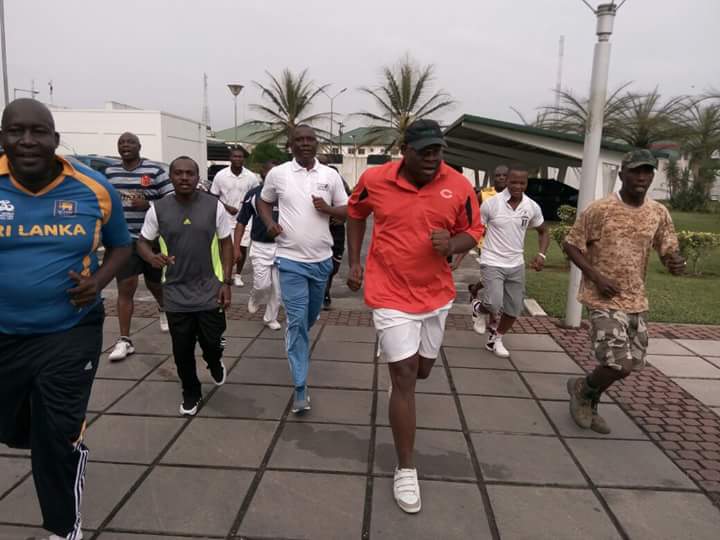 By Snoopy Boy
Doubtless, when Dickson came on board there was this spontaneous euphoria of project execution in and outside the state capital Yenagoa. At that time, he was very confident to proclaim to Bayelsans that he’s going to turn Yenagoa to little Dubai.
Frankly speaking, he somehow dramatizes this lofty dream of his to Bayelsans as he goes about embarking on some infrastructural development projects such as the model secondary schools’ buildings, ecumenical centre, Yenagoa/Oporoma, Sgbama /Ekeremor road projects etc
But today, it is sufficed to say that many of the projects are yet to be completed. He spent billions of naira on these projects.
While he was embarking on these projects, it is severally suggested by stakeholders and other opinion leaders that the governor ought to have prioritized his projects at the starting point. Only well thought out projects should have been embarked upon but his initial zeal and high spirit in him may have distracted his clear vision to note that administration hall mark.
The projects were so many at a time that he cannot provide money for them to be completed. The Afurumapepe never adhere to advice.
Today, almost all the projects are stuck up begging for completion. The contractors have vamoosed from their sites because of delay payments of their contractual sums.
For instance, the first fly-over bridge the governor claimed to have completed was highly criticized as it did not go down well with the people. Their argument is that the bridge is not economically viable but rather they preferred a project that would generate revenue for the state.
This school of thought also convincingly believe that the expansion of the Isaac Adaka Boro Expressway is not necessary as plenty Bayelsans are not in dare need to buy cars to ride. Also are the Archive, Museum and Music Academy buildings which are not utilized for now. That the money expended there would have been used to do other things entirely.
To them, the three senatorial road projects should have been given priority attention by the restoration government as it would open up the rural communities to develop their economy. Not only that, it makes transportation easy for both urban and rural dwellers. That if Dickson had embarked and complete these roads in his first tenure, his name would be written on the platter of gold.
Now you notice the hot zeal by his Excellency to actualize his much proclaim Dubai is dampening following his somehow ‘vague’ and ambiguous citing of projects in and outside the state capital. Hardly one project is ongoing now.
The governor was hot and now very cold on project execution. However, the housing project that he abandoned right opposite Aridolf Resort Wellness and Spa at Okaka which is been revisited is very cold to execute. No vibrancy is activated at all after the initial eviction of the squatters.
It is said that the governor would want to turn the place to a shopping mall.
Not only that, scanty electrical engineers were also seen along the Azikoro Road Ekeki, fixing solar street lights; solar streetlights that will ignore maintenance by the authorities after it is being put into use within few months. Dickson is slowly coming from the cold as per project execution.
There is absolute lull in project execution in the state because there is no money. The state is broke, some may say.
The only viable project that is steadily ongoing is the Cargo Airport cited at the Amassoma axis of the state. It is a joint project by the federal and state government. Apart from this singular project, all other uncompleted projects are begging for completion.
Dickson’s cold attitude towards project execution may be likened to a woman who demonstrated so much love for a man at first, but for her to hold firm on him, she reluctantly slow down her lovely moves towards him for a while and then she resumes to share love with him again. This is a kind seduction art she develop to keep the man to herself forever.
Governor Dickson no doubt is an ambitious man. He wanted to make a difference from others that have come to rule Bayelsa state. He was so much in a hurry to achieve that level but somehow lacked good administrative skill to score the right goals for himself.
Political study revealed, as usual, that a second tenure governors’ in Nigeria never take projects execution serious anymore as they devote much time for their personal well being of themselves after they leave office, although there are exceptional cases in point. They often times spend monies on cronies they would want to install in government in order to protect their business empires they established while they were in office.
For instance, former president Goodluck Ebele Jonathan is now globe-trotting, laze around beautiful city beaches to catch fun after leaving office, relying on the wealth he acquired while in office. It is gathered that the man spent the last quarter of 2015 in Cote’doivre to do business and enjoy himself. Governor Dickson too may not far from this jollification after leaving office.