Home » NEWS » Agric is our own – Sen Lokpobiri

Agric is our own – Sen Lokpobiri

Posted by CREEK NEWS WEEKLY Posted on 11:21 AM with No comments 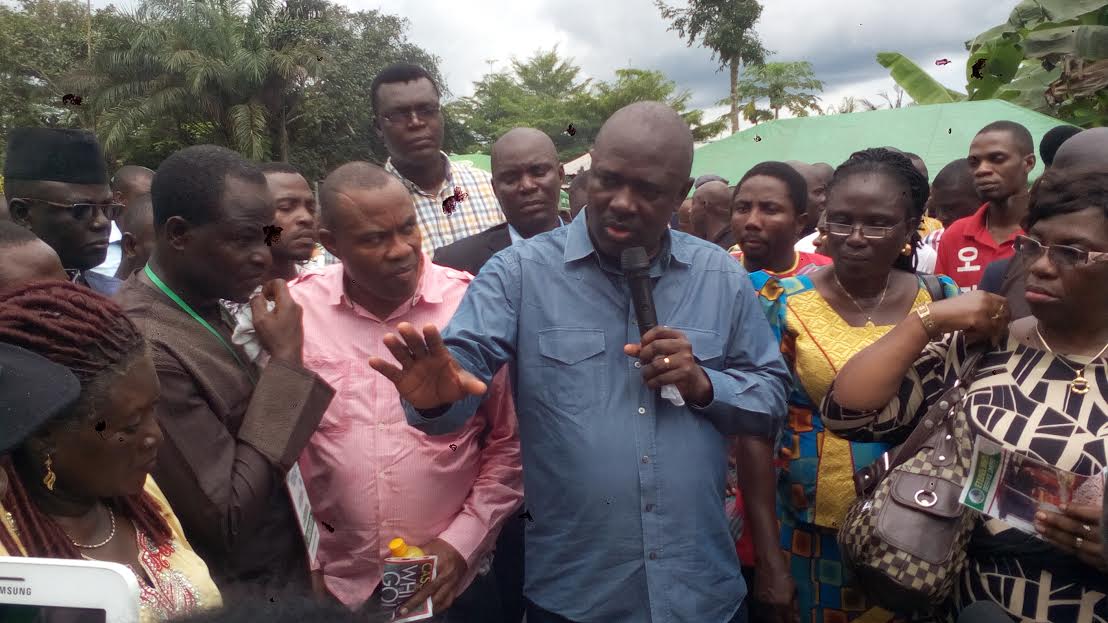 The Minister of State for Agriculture and Rural Development, Senator Heineken Lokpobiri has said that the post-oil economy of Nigeria would be driven by the agricultural sector.
According to him, this would  serve as a ready alternative source of revenue generation not only to government but also to individual farmers and private organization through the various agro-allied value chains.
The Minister made the remarks in a Town Hall interactive session with stakeholders in the agric sector at Achievers Farm, Igbogene, Yenagoa, Bayelsa state at the weekend.
He noted that this was a wake-up call for Bayelsans to key into the agricultural sector of the economy and understands the potentials in it.
According to him, Bayelsans stand on a good stead to benefit from the agro-revolution that has just kicked off across the country, stressing that the Federal and state Ministries of Agriculture would collaborate to benefit from the system.
He said that the country needs about 7.5milliom tons of rice for local consumption but the present supply rate to the over the 150million Nigeria population is about 10,000 tons, about 334 trailer load is grossly inadequate, adding that the country is in deficit of rice supply of 4million metric tons for its population.
The Minister of state expressed concerns over the security challenges in the Niger Delta region and condemned destruction of pipelines by militants which has drastically affected oil production and advised them to refrain from it.
Senator Lokpobiri on the other hand has urged youths in Bayelsa state to go into agriculture as a business to make money.
He assured farmers in Bayelsa that they would access the Federal government loans facilities, adding that the future of the Niger Delta is not oil but rather agriculture.
The Chief Executive/Managing Director of Achievers Group of Farms, Chief Lionel Jonathan-Omo in his remarks said, ‘the Niger Delta has a capacity to feed Nigeria in terms of agric products if there is political will to change the mood of the law to to re-tool agriculture and industrialize the sector.”
The entrepreneur said that agriculture would provide the solution to employment and poverty in the land, lamenting the fact that most Bayelsa farmers have no access to loan facilities provided by the Federal government and Central Bank due to high collateral attached to the beneficiaries and therefore urged the minister to correct it.
Also speaking, the President of Ijaw Youth Congress (IYC), Comrade Udens Eradiri commended the organizers of the town hall meeting and the Hon. Minister for coming home to identify with his people.
According to him, Bayelsans are not lazy but the politicization of the country has put the people at disadvantage in the system to function well on the agric sector.
He observed that the Brass Fertilizer Company which is currently holds 89 per cent stake in employment of Bayelsa youths, when operational could reduce the unemployment rate in the state.
The IYC boss also disclosed that Ijaw youths in conjunction with mobile phone companies like MTN, Glo, Etisalat and Airtel to organize what he tagged “Bayelsa Food Fair Exhibition within the later part of this year, adding that it is time for youths to look inward to promote Bayelsa food products to the outside world.
Various stakeholders in agric business which includes Shell, Chevron, Bank of Industry, Bank of Agriculture and ZADA participated in the interactive session with the Hon. Minister of State for Agriculture and Rural Development.
They all highlighted their sustainable development agendas between government and farmers in the state and the Niger Delta region as whole, adding that inclusive partnership built upon would add value to farmers.