Posted by CREEK NEWS WEEKLY Posted on 8:32 PM with No comments 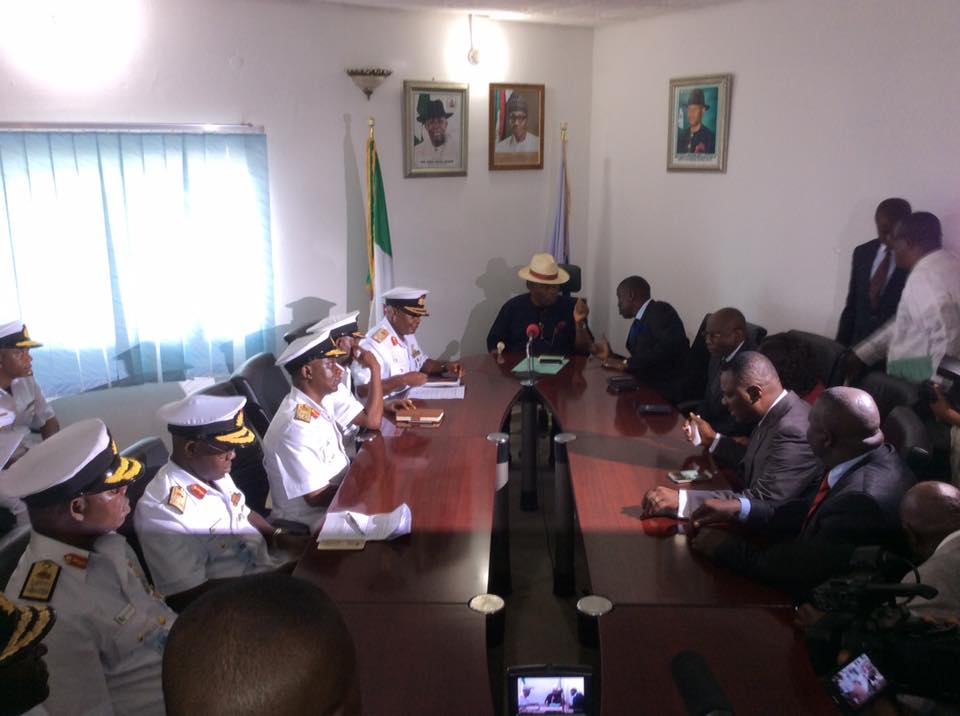 The deputy Governor of Bayelsa state, Rear Admiral Gboribiogha John Jonah (rtd) has commended the Nigerian Navy for naming one of their flagships after the first Chief of Naval Staff, Rear Admiral Nelson Bossman Soroh from Bayelsa state.
The deputy governor made this commendation when the Chief of Naval Staff, Vice Admiral I.E Ibas paid him a courtesy visit in Government House, Yenagoa.
Rear Aminiral Jonah who stood in for Governor Henry Seriake Dickson expressed the hope that the new flagship would enable the personnel to acquire new skills while on board.
He was particularly happy over the navy‘s preparedness to provide engines for unused boats owned by the Bayelsa state government to enable them to put into effective use as part of their efforts in reducing crime in the waterways.
According to the deputy governor, Bayelsa is deltaic and riverine, stressing that he strongly believed that the navy under his leadership could brave the waves to establish its welfare institutions in the state, particularly the 100 hectares of land provided by the state government for them to build their barracks.
To him, the Central Naval Command in Bayelsa state has done well five years after its formation in the state.
Earlier in his remarks, Vice Admiral Ibas told the deputy governor that his entourage was in the state to conduct inspection of bases, units and other establishments to evaluate their operational skill, equipment in Calabar, Yenagoa and Delta states respectively as part of annual assessment exercise.
He commended the far reaching logistics provided by the state government for the navy in the state and expressed the hope that the navy would join hands together with other security outfits to combat maritime crime with a view to maintain safety.
However, Vice Admiral Ibas requested for land from the state government to enable them establish a welfare school to compliment others in providing education for children.