Posted by CREEK NEWS WEEKLY Posted on 3:19 AM with No comments 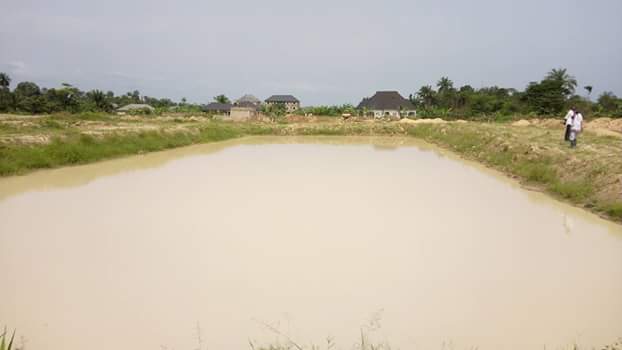 By Austine Bodo/ Eric Eweke in Yenagoa Nov. 22, 2016
It appears that Governor Henry Seriake Dickson of Bayelsa state is poised to boost the state economy through massive fish farming to consolidate the gains of the restoration agenda.
Governor Dickson dropped this hint when he inspected the ongoing Bayelsa State Ultra-modern Epie Upland Fish Farm Estate project at Igbogene, a suburb in Yenagoa City.
Speaking to newsmen at the project site, Governor Dickson disclosed that the fish farm is made up of 500 fish ponds.
Furthermore, he said that each of the 500 fish ponds will be allocated to one individual youth, adding that each of the beneficiaries is expected employ additional three youths to take care of their ponds when the project is completed.
According to him, Bayelsa youths will be happy because the project is meant for them to be self-reliant as this is line with the restoration government in creating more job opportunities in the state.
Governor Dickson also visited the project site of the International Motor Park and Terminal Center, Igbogene-Yenagoa.
He told the contractor handling the project that more funds will be released for him to complete the project on schedule and further advised him to erect a fence around the site.
He commended the contractors handling the two projects embarked upon by the state government at their stages and implores them to expedite action to complete the said projects for use.
It could be recalled that Governor Dickson told Bayelsans that it is time for him to work as the election litigations are over; believing that there will be no more distraction from whatever quarters.
Earlier, the state commissioner for Information and Orientation, Hon. Jonathan Obuebite commended Governor Dickson on the project tour to ascertain the level of work done so far and enjoined the contractors to complete the projects.