Posted by CREEK NEWS WEEKLY Posted on 9:08 AM with No comments
By
Olaotan Falade
- 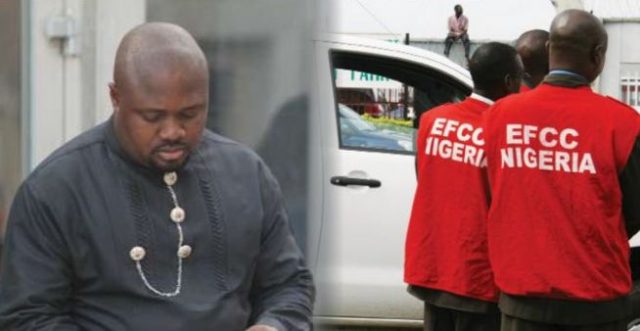 A former Special Adviser on Domestic Affairs to the immediate past President, Goodluck Jonathan, Waripamo-Owei Dudafa, has alleged that the Economic and Financial Crimes Commission, EFCC, wants him to write incriminating statements that would indict the former First Lady, Patience Jonathan.
In a petition to the National Human Rights Commission, NHRC, dated November 4 2016, the former Special Adviser maintained that the anti-graft agency was after him because of his closeness with the former First family.
The former Presidential aide claimed that EFCC was desperately out to keep him in custody despite meeting the bail conditions granted him by two federal judges.
The petition reads in part, “My only sin is that I have refused to yield to the Commission’s pressure to write false statements to incriminate the former first lady, Dame Patience Jonathan.”
Recall that the anti-graft agency had recently ordered the freezing of some bank accounts belonging to the former First Lady due to its ongoing investigation of alleged money laundering.
EFCC had also confirmed that Mrs Jonathan is being investigated for money laundering, though no case has been instituted against her in any court yet.
Similarly, Dudafa is currently facing trial before Justice M.B. Idris of the Federal High Court, Lagos on a 23-count charge relating to a N1.6bn fraud.
The former Presidential spokesman has continued to languish in detention of the anti-graft agency despite been granted bail.
Just last Thursday, a Federal High Court in Lagos convicted four companies linked to Dudafa  for laundering $15.5m kept in their accounts with Skye Bank
.
COURTESY THE NEWS GURU