Posted by CREEK NEWS WEEKLY Posted on 6:49 AM with No comments 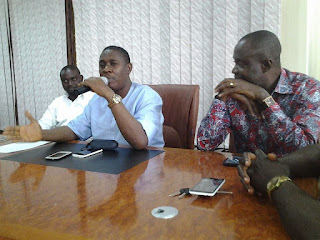 Rt. Hon. Konbowei Benson, Speaker Bayelsa State House of Assembly
Bayelsa state lawmakers need God’s intervention to sustain good leadership of the state to grow.
This was contained in a prophetic declaration by the Chairman of Pentecostal Fellowship of Nigeria, PFN, Bayelsa state chapter, Reverend Washington Agala while inaugurating the Bayelsa state Christian Legislators’ Fellowship International in Yenagoa.
The clergy noted that the Bayelsa state House of Assembly in its mandate to make laws for the people of the state is an institution to produce good leadership qualities for others to follow thus it need God’s presence to guide them.
According to him, Bayelsa state is still creeping for development following the absence of good leadership unlike the Western part of the country that has moved forward rapidly in terms of development.
He is of the view that there is absolute need for correction now that elders are no longer obeyed and respected by youths following the absence of good leadership by example, adding that God should help them to change the situation.
However, Reverend Agala opined that criticisms are allowed in democratic settings of the world but it is not used to debase the government and leaders.
He prayed the pastoral members of the church to show good example of leadership to the society they live so that Bayelsa state should never remain the same as he equally believes that the state was not a child of circumstance but well created to grow to the next level.
In his remarks, the Speaker of the State House of Assembly, Rt. Hon. Benson Konbowei commended National officers for coming to the state House of Assembly to inaugurate the Christian Legislators’ Fellowship International, assuring them that they would get all his support for the fellowship to grow from strength to strength.
He recalled that he loves God more than anything else because the Lord helped him while he went through his election travails, describing those days as traumatic in his life time.