Posted by CREEK NEWS WEEKLY Posted on 2:11 AM with No comments 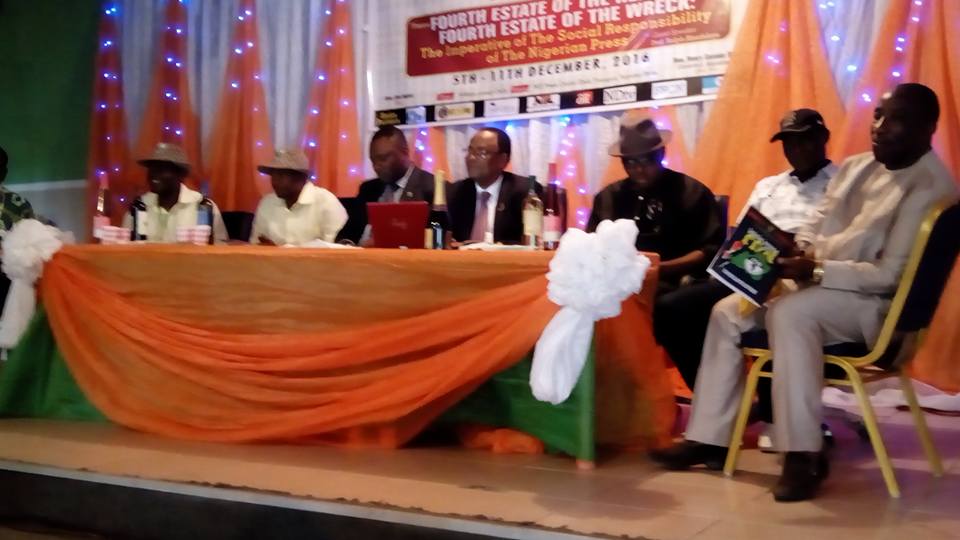 The rehabilitation of the auditorium of Nigeria Union of Journalists, NUJ, Beyelsa state council, Yenagoa is better than winning six battles by Governor Henry Dickson.
Mass communication impresario, Prof. Ralph Akinfeleye dropped this hint during a public lecture as part of marking the activities of the 2016 Press Week organized by the Nigeria Union of Journalists, Bayelsa state council.
According to him, Governor Dickson’s acclaimed election and court litigation victory could no way to be compared to building good relationship with the media.
He is of the view that the NUJ auditorium needs urgent facelift for the union to meet up the global challenges of information technology.
The state commissioner of Information and Orientation, Hon. Jonathan Obuebite who chaired the occasion was asked to convey this remarkable message to Governor Henry Seriake Dickson by the mass communication Prof.
However his lecture entitled “The Fourth Realm of the Estate or Wreck” has reminded journalists of their constitutional social responsibility to society by holding the government accountable to the people.
While doing this, he equally advised journalists to avoid publications that bordered on national security which must be verified carefully not in order to be infected with rabbis, adding that Nigeria operates authoritarian and sometimes libertarian press theories.
He reiterated that the press is not elected unlike the other arms of government which enable it to bite and fire with fairness and objectivity, making sure that newsmen should be abreast with the Freedom of Information Act by ex-president Goodluck Jonathan.
On his part, the Chief Press Secretary to Governor Siariake Dickson Mr. Daniel Markson while delivering his paper entitled “Media and Government Relationship the Bayelsa Experience’ opined that there is cordial relationship between government and the media in spite of his inability to pick calls from journalists at times but he used to call back after official engagements, saying that there is no rivalry and urged journalists to work together with government.
In his contribution, Hon. Obuebite advised that newsmen should be patience and wait for the stipulated seven days to get the other side of the story as required by the Freedom of Information Act before publication.