Posted by CREEK NEWS WEEKLY Posted on 9:12 PM with No comments 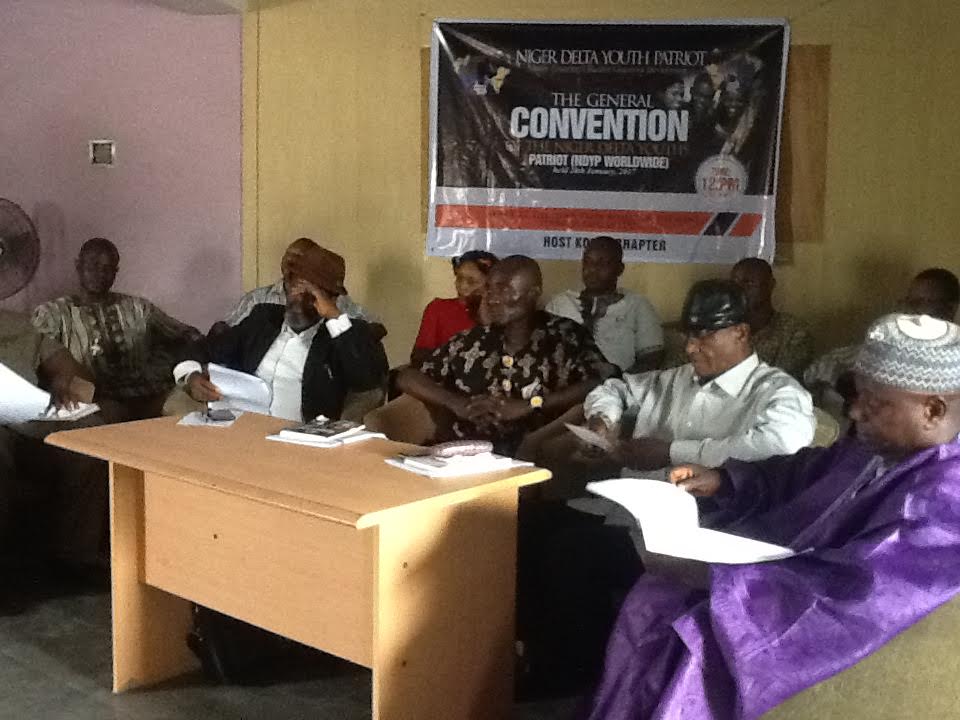 The Niger Delta Youths  Patriot (NDYP), a group out to ensure peace and development in  the oil rich region has identified causes of continued violent activities .

At its first National convention  where the Nine states that made  up the region gathered in Yenagoa, the  Bayelsa state Capital,  it expressed determination to proffer solutions  to the myriad  of issues resulting from oil related activities.

After  a critical study of the crisis situation in the region, Comrd Archt. David Awasa, the National President ,  accused  the multinational oil exploration Companies as behind  the violence that has engulfed the region for decades.

The injustices created in the remote oil producing Communities by the oil bearing Companies has continued to ignite counter activities from the local Communities where oil is produced, he added.

"Technically these problems are done  in the remote  areas where over 75% of oil installations are located" , said the National President of NDYP .

Describing the NDYP as a group made up of Professionals, think tanks, Technocrats, Oriented men and Women in the region,  aimed at forming a strong synergy that will promote and metamorphose peace and stability in the region which has been bedeviled by violence and underdevelopment.

The entrepreneurial empowerment skills, he added, would include creating skills/ techniques in productions and entrepreneurship that will be marketable at the rural areas, Community to Community sensitization programme for youths who sees violence, kidnapping , Sea Piracy , Pipeline Vandalization, gun fire agitations, Crude oil theft and the amnesty stipends as the only way for survival and breaking the bridge of Communications between the multinationals, government representatives such as Councillors, Assembly members, Federal House of Representatives   .

According to him,  the NDYP has also  designed   a micro and macro  mechanized  farming  project to the Federal Ministry of Agriculture and will formally be presented as Project "G0-1+( Agro) , aimed to maximize food  security  in the Niger Delta region and Nigeria at large .

The project G0-1+, if adopted would go a long way in solving the myriad of problems in the oil rich Niger Delta region, added the Awasa who further expressed fears that  If the project is not timely adopted and implemented to keep youths off their current agitations, youths may be encouraged to continue "increase in techniques in various channels or gun fire agitation processes"
"It is also recorded that the techniques and tools used by youths in the early  80s to 90s were not the same as the ones used recently because  of current advanced technology and information exposure", he noted.


Chief  Edege Peter Edege Chairman of all Chairmen, Yenagoa host of the Convention ,  noted that NDYP is an organization with the best structures that is well instituted to empowering the people of the oil rich region, especially the grassroots Communities where the oil is explored .

Edege  who eulogized  the doggedness of the NDYP   especially in connecting federal government to understand the challenges of Niger Deltans  advised members to see the group as an instrument that will bring development to Niger Delta people.

Others who spoke at the event included Chief (Chief ) Gregory  Onah,  Governor of the National Advisory Council NDYP.

"Our vision is to ensure that the industrialization and economic  empowerment of  the youths  in the  oil region is realized ", said Onah  stressing  "We shall succeed  in our vision because the vision is  not for personal goal but for the whole of Niger Delta, not just for ND YP alone".

He advised the Federal Government to appreciate  and recognize  efforts of the NDYP at rooting for peace in the hitherto violent region.

Also in his speech, Dr. Emmanuel Opia, a Security Expert, who represented Chairman Board of  Truees,  NDYP,  High Chief (Capt) rtd. Godwin Ossa  Uzoka, recalled that the  region is engulfed  by crisis  since the discovery of oil in commercial quantity at Oloibiri.

Opia noted that the crisis situation in the region was caused by the inability of successive administrations in Nigeria to take along the owners of oil resources in the management of the oil revenue.

He decried that  the  people of the region have made lots of sacrifice for the stability of Nigeria, yet there is nothing to show for it.

"As you all know it, Niger Delta is a region that is engulfed by many resources Since the discovery of oil at Oloibiri .The enterprenuering aspect of oil activities began in 1958."

Recalling  the popular saying of Marthin Luther King that one day the colour of his Children will not be discriminated as they would the streets of America. So also, one day Niger Deltans will come together to speak with one voice on how the region would be emancipated from the current  neglect .

"Over the years we have failed to receive the reward of  our sacrifice for Nigeria", noted Dr. Opia who however pointed out that "The future of the Niger Delta   is glorious . Niger Deltans are peace loving people ....  Today, Niger Delta has given birth to NDYP"

"NDYP will rewrite  the history of Niger Delta ,
The multinational oil Companies have exploited us for so long
Today is heralded to the World and it's focusing  on the Niger Delt"

Alluding to the recent visit of Vice President Yemi Osinbajo to Warri and it's environ as part of the peace process for the region, Opia quoted him to have said  "i want to have rappore  with the youths of the Niger Delta."

According  to him, ,  the Vice President says they "are tired of working with the elites of the region "nHe says he want to meet face to face with the Niger Delta patriots.soon"
"We are not forming a think for the Niger Delta, we know the problems of the region already"
"Even Vice President  says the Region  have noting to show despite its enormous oil revenue for Nigeria , it is the goose that lays the golden egg."
"We should rise up to the challenge by using advocacy to the Niger Delta challenge."

In his speech, Comrd Paul Uwadia  Vice President , NDYP , says  the group "Want to ensure that all the grassroots are empowered.".

He frowned  at the situation where  "All our governments  of the elite have done is to develop from up to bottom approach ,  but  we , members of the NDYP, want to start it from bottom up approach".

"It will be a peoples oriented mission so that it won't be only a  government  of the elite,  government  for the cactus by the cabal which is wrong.  The grassoort Ecoonmy is the best and that is why we want to begin from the grassroots empowerment drive"

In her remarks, Easter Fafaa. Women Leader NDYP, says  "We want to empower the Niger Delta youths for them to get better , to get something doing, not to carry guns.

She  believes that the Niger Delta  Youth  Patriot is capable of meeting the obligation of empowering the youths for their future, and  advised the youths to be patience and cue into the development agenda of the NDYP.

"They should be patient because we are preparing something good for them", she said.