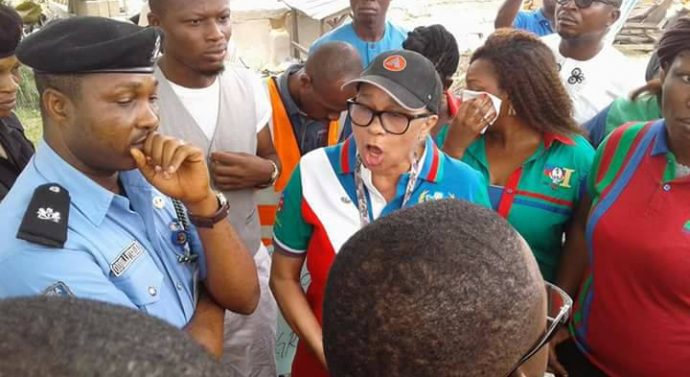 A human right activist, Mrs. Annkio Briggs has called for a halt, the
donation of 1,200 hectares of ijaw land to herdsmen and accused the
Nigeria Police Force Bayelsa state command to have connived with the
state government in beating up some citizens at a love rally that was
to be carried out by Bayelsans over the land donation to herdsmen by
the government which the government said is a calculated attempt to
prevent farmers herdsmen clash in the state.

Mrs. Annkio while addressing a press conference shortly after the
disruption said although some persons were carrying placards with
inscriptions of nonpayment of salaries, underfunding of our
institutions amongst others which she was trying to caution against
before the attack by paid thugs led by the special Adviser to the
governor on security matters, Dr. Boma Spero-Jack.

Annkio said the Divisional Police Officer of Akenfa police station,
Yenagoa who was still in possession of her mobile phone and identity
card as at the time of the briefing was putting his hand right above
her shoulder before the attack on them, believing that the DPO putting
hand across her shoulder was a signal to say 'attack'.

Annkio said Bayelsans are against this act from governor Dickson due
to antecedents of herdsmen in Agatu killings, Enugu killings, Southern
Kaduna killings and the fear of similar killings of Ijaw people in
future as Bayelsa is the only central Ijaw speaking state which the
governor called, " the Jerusalem of Ijaw nation", making every Ijaw
man in Niger Delta affected.

She said a cattle rearing is a private business noting that selling
lands to herdsmen is inviting death and mayhem upon themselves as a
people calling on them to choose between death and eating of meat.

One of the wounded victims of the valentines love rally, Mr. Preye
Dressman said  the thugs came in their numbers while the security men
aid them in the attack even after writing formally to all the security
apparatus to provide security as we carry on our peacefully love
rally.

Dressman said the thugs were armed, the police shots sporadically into
the air to dispatch them from the rally instead of making arrest and
that even the few that were arrested by residents and handed over to
the police were later released in other to twat the effort of the
rally.

Others who made their voices heard where Pastor Tony Oyinkuro Banks
and the President, Ijaw Women Connect Wworldwide, Mrs. Rosemary
Granaingba who described the actions of governor Dickson as a show of
shame hinting that they expected the governor to have bought caws and
handed over to Ijaw youths who have the potentials to roar caws and
multiply them as a means of generating employment.

Mrs. Rosemary who was kidnapped on  Feb 9 as a result of this, said
they cannot sit and witness this insensitive give away of Ijaw lands
to herdsmen which the World Terrorist Monitoring Group has identify as
the fourth deadliest terrorist group in the world.

On his part, Mr. Banks disclosed that he resigned from active civil
service to protest against various issues under governor Dickson administration..