Posted by CREEK NEWS WEEKLY Posted on 4:13 AM with No comments 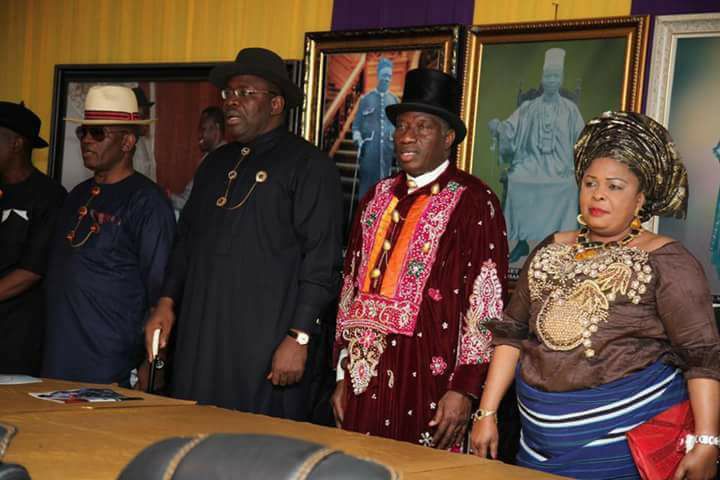 Former President of the Federal Republic of Nigeria, Dr. Goodluck Obele Jonathan has called on the people of Ogbia kingdom to foster unity with a view to move the kingdom to the next level of development.
He made this remark at the coronation and presentation of staff of office to the new Obanobhan of Ogbia kingdom HRM Dumaro Charles Owaba in Ogbia Town on Saturday.
Jonathan who chronicled the Obanobhan stool of Ogbia kingdom from 1958 till date however noted that there was traditional litigations among the people in the past, saying that when a new king is coronated, new problems crop up.
This posture he said is not befitting to the people of the kingdom because the Ogbia kingdom is a unique empire with its social revolution spreading from Brass to Ogbia.
According to him, the Ogbia kingdom has three first class chiefs, four second class chiefs and other third class chiefs to reckon with today
Therefore he would want everyone to foster unity among the people because if there no unity, there will be no peace believing that with humility the new king can succeed.
The former president who hails from Otuoke in the Ogbia Kingdom opined that the people of Ogbia should appreciate the new King as there were three contenders to the throne but his HRM King Owaba won for his unique traditional leadership style.
He said that the new king has ruled his community, Otabi, for more than 25 years without traditional litigations before his ascension as the king of Ogbia Kingdom.
In his remark, the new Obanobhan of Ogbia Kingdom, HRM King Owaba expressed his gratitude to God for his ascension to the throne and he particularly commended Governor Dickson of Bayelsa state and other well meaningful sons and daughters of Ogbia Kingdom for their immerse support for the success of the coronation ceremony.