Posted by CREEK NEWS WEEKLY Posted on 8:01 PM with No comments 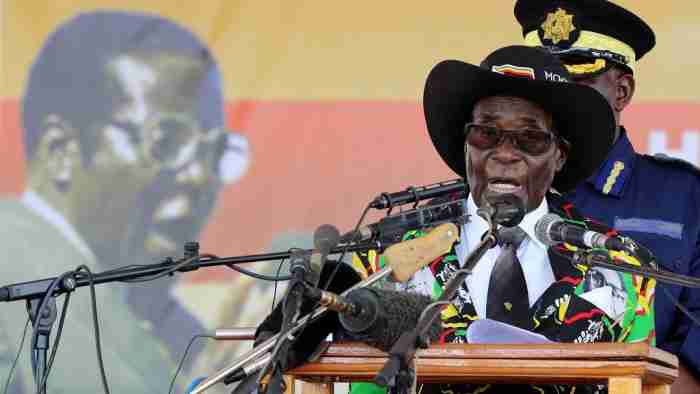 His spokesperson confirmed on Wednesday that President Mugabe traveled to Singapore for a medical checkup.
“His Excellency the President left for Singapore for a scheduled medical review. We expect him back in the country early next week,” spokesman George Charamba said. He did not give details.
Days after celebrating his 93rd birthday in the city of Bulawayo, Zimbabwean President Robert Mugabe has flown out of the country to seek medical care in Singapore.
The president usually travels to the southeastern Asia country to seek medical attention from what his aides have repeatedly said is eye cataract.
As Mugabe flew out, nurses at public hospitals joined junior doctors in a two-week strike that is meant to pressure the government into paying 2016 bonuses due in December.
Major hospitals have turned back cases that are not emergencies due to the strain brought on by the strike. Medical personnel in the army were deployed last week to help ease the burden on some hospitals.
The veteran leader’s critics say his overseas medical trips testify to the collapse of Zimbabwe’s public health system since the economy started to fall apart in 2000.
A visibly weak Mugabe now struggles to walk. His public speeches have become meandering and repetitive, the latest being an interview he granted a day to his brithday. In the over one-hour chat, he spoke on issues relating to foreign affairs, the economy and the hot issue of succession in his absence.
The issue of succession to Mugabe, the only leader Zimbabwe has known since independence in 1980, has divided the ruling ZANU-PF party into two camps, with one supporting Vice President Emmerson Mnangagwa and the other Mugabe’s wife, Grace.
During his birthday celebration last Saturday, Mugabe made it clear that he was ready to continue in charge after 36 years in charge of the southern African nation.
The annual party is estimated at a cost of up to $1 million (0.9 million euros). It includes a multi-course feast and vast birthday cakes, putting many Zimbabweans in a state of aggression as the country endures severe food shortages.
Holding the event at a school in Matobo has also riled locals as it is close to where many victims of Mugabe’s deadly crackdown on dissidents in the early 1980s are thought to be buried.