Posted by CREEK NEWS WEEKLY Posted on 10:41 PM with No comments 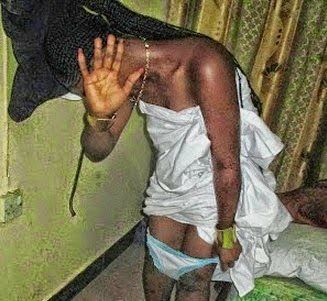 A house wife who has never believed what her hubby told her has ended up making love with her husband’s gate man.
The house wife whose name was not immediately known is allegedly married to a Yenagoa socialite who lives in a high brow apartment with clean toilet and gardens.
Reports say that the wife suspected her husband of having sex with their maid so she decided to set a trap for the husband by sending the maid to the village for the weekend without telling her husband.
At night, the husband told his usual story "darling I am going to watch wrestling in the sitting room" and left.
The wife silently went to the maid's room and, without the lights in, laid down on the bed, naked. As expected, the door opened shortly after and he joined her on the bed. Without wasting time and without a word, he had sex with her.
After the fifth round she said, "I beg, it's enough, I have caught u. So this is how you use to have sex with her. When it's with me you will grudgingly manage one round and you will tell me you are tired but now, with who you thought was the house help, you have done it five times and you are still demanding for more ...."
She did not know that it was her husband’s gateman who sleep thier housemaid at night as he replied, in shock, "Madam, I am very sorry. I didn't know you were the one!"
"Ewooooooo!" she shouted. The noise attracted the husband who rushed in from the sitting room, switched on the light and caught them red handed. - Courtesy: Chris Odi