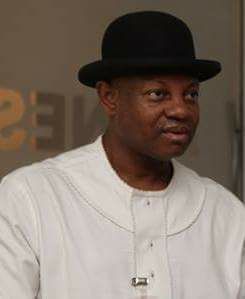 By Papa Austino in Yenagoa May 20, 2017
The Federal Government has absorbed 350 trained ex-agitators to work in various ministries at the federal level.
The Special Adviser on Niger Delta and Coordinator of the Presidential Amnesty programme, Brig. Gen. PT Boroh (rtd) dropped this hint at the flag-off ceremony of 100 students who are undergoing re-certification training programme at the Bayelsa state International Institute of Tourism and Hospitality in Yenagoa.
He said, the amnesty programme was declared by late president Shehu Yar’Adua  in 2009 with a view to develop the Niger Delta environment and make progress , adding that the federal government sees this as a sensitive project that would be engaging the people with purposeful empowerment and re-integration into the society.
He advised the delegates to be serious with their studies and disregard the notion that they are pullovers, saying the training programme can catapult them to the next level of entrepreneurial profession which is regarded as the best opportunity for them.
The coordinator also opined that the amnesty training programme has produced students that can compete favourable with their counterparts within and outside the world, describing them as wonderful talents that can represent Nigeria.
In another hand, Boroh equally said that the amnesty programme is also focusing on the agric sector of the economy to drive home food production and security.
Governor Dickson who was represented by the state commissioner for Tourism Development, Mrs. Ebiere Irene Musah charged the delegates to be serious with their studies.
According to her, the governor is serious with the establishment of the international institute of tourism and hospitality in the state because he did not joke with things in the Ijaw nation in general.
He also wanted the best training of Ijaw people by the diversifying the local economy through tourism and hospitality business to change their lives in spite of the dwindling resources of the state, she said.
She hinted that the Bayelsa state government in conjunction with the Shri-Lankan government hospitality sector to sponsor some of the graduates who performed brilliantly at the close of the training programme.
However, she declared to the ex-agitators in the training programme may not be paid their monthly stipends at the end of their study as they would be empowered to start their business in the hospitality industry.
She showered encomiums for the Rector of the institute, Chef Samuel Timi Johnson for the vigor he attached to the success of the school so far.
The rector on the other hand, commended President Buhari for appointing an illustrious son of Bayelsa state to oversee the Presidential Amnesty Programme, saying that the management and staff of the institution appreciated the efforts by Boroh for facilitating the process for deployment of the delegates being the first time Bayelsa state is hosting the programme.
He called on Bayelsans in and outside the state to take advantage of the various programmes especially the vocational training being offered by the institute to make a meaningful life.
Meanwhile a former ex-agitator in Niger Delta, Comrade Pastor Rueben in his address remarked that he will donate N100,000 for the best graduating student; N75,000 for the runner up and N50,000 for the third place, adding that ex-agitators worked hard in the battle field to make the amnesty training programme happen in Bayelsa state.