Posted by CREEK NEWS WEEKLY Posted on 7:11 AM with No comments 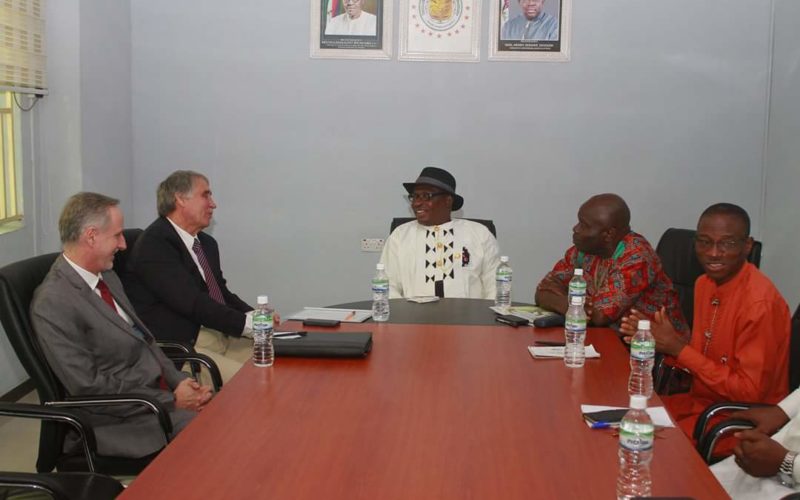 The acting Vice Chancellor of Africa University, Toru-Orua, Bayelsa state, Prof. Chris Jacobs has lauded the management of the International Institute of Tourism and Hospitality for its innovation and creativity in achieving the set goals.
Prof. Jacobs made this commendation when he paid a courtesy call on the management of the school in Yenagoa.
He assured the management of the institute that the Africa University would back the realization of its establishment by the state government.
Also speaking the Coordinator of the University Project, Mr. Theo Theodorous, said the University has enrolled over 400 students, in the school of foundation studies as at April this year, while its degree programmes shall commence in September with six faculties such as Agriculture, Health, Humanity, Tourism among others, with the state of art E-library, which will be put to use soon.
Theodorous also eulogized the governor for given the impetus needed towards the actualization of the University and therefore called on the Institute to partner with the University most especially in the area of training, students exchange programme among others.
Earlier, the Rector of the Institute, Mr. Samuel Timi Johnson noted that the Institute which came into existence in 2012 is fully functional and training manpower in key technical areas, that will help create jobs in the sector.
Mr. Johnson also noted that the Institute has mandate to award diploma and professional certificate to practitioners and players in the industry. He assured the visitors that some of the challenges being experienced during the take-off of the Institute are being addressed, while soliciting the support of the University in the setting up of its Library.
The Vice Chancellor and the University Project Coordinator later inspected some facilities including the training kitchen, craft studio, makeup studio, fashion design studio, among others, which they described as world class.