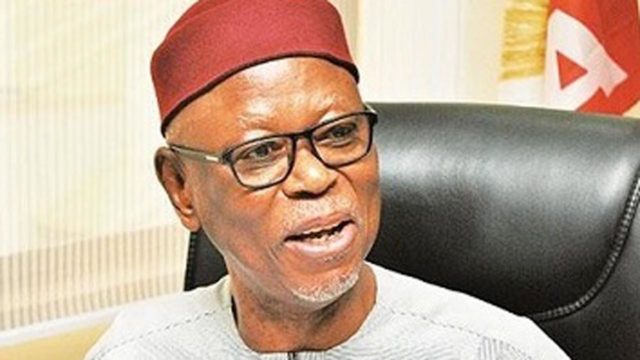 By Osa Okhomina,Yenagoa
The crisis of Bayelsa state chapter of All Progressive Congress (APC) has deepened as armed security personnel made up of Policemen and men of the Department ‎of State Security (DSS) took over its secretariat in Yenagoa following the suspension of the Chairman of the Party, Chief Tiwei Orunimighe and two others.

The National Working Committee (NWC) of the APC had on Thursday evening announced the suspension of the Chairman of the Party, Chief Tiwei Orunimighe, the Vice Chairman, Hon. Eddy Julius and the Vice Chairman, Marlin Danlin over alleged anti-party activities and gross misconduct.

At the Party Secretariat, located along the Mbiama/Yenagoa Road area of the Yenagoa State capital, armed Policemen and DSS personnel numbering over fifteen were seen mounting vigilance.

Some of the Party Executive loyal to the Former State Governor, Hon. Timipre Sylva and led by the Chairman, Joseph Fafi, the Youth Leader, Comrade Edison Sogwe and the Secretary, Alabo Martins‎ were also present.

The presence of the loyalists of Chief Timipre Sylva ‎loyalists however attracted an angry outburst from an ex-militant leader and loyalist of the suspended Chairman, Africa Ukpariasia also known as General Africa.

General Africa,who arrived at the barricaded party secetariat at about 12.45 was prevented from driving into the premises in his black coloured jeep. Africa, who was visibly angry threatened to chase the Sylva loyalists out of the secretariat, ‎saying" we will know who owns the Party."

But most of the Sylva loyalists shunned him and kept their cool while security operatives asked the angry ex-militant leader to vacate the secetariat.

The State Commissioner of Police, Asuquo Amba and the State Director of the DSS,Mr. Gideon Agbaje‎ also visited the Party secretariat met with the Secretary of the Party, Alabo Martins said they were at the secetariat to ascertain that the area is calm and that there is no breach of peace.

The Member of the State House of Assembly elected on the platform of the APC, Hon. Isreal Sunny Igoli‎, who arrived at the Party secretariat met with the members of the security team and addressed the Party supporters,asked everyone to remain calm and not allow the supporters of the suspended members to throw the party into crisis.

According to him," the party has concluded the non-elective congress and the process is at appeal stage. And the key stakeholders have met and affirm the authenticity of the decision of the party at the state level. ‎Now, everybody should go home and allow security agents to be here."

"Nobody should come to the secretariat until the National Working Committee issue a letter to whoever is going to act until a new congress is held to elect a substantive Chairman.‎ Everybody should go home and let us not make the secretariat a crisis venue. As they have pronounced the suspension of the Chairman and others, the letter from NWC will make whoever to take charge and the person will give copy of the letter to the security agent."

"‎And the person will call for meetings and preside over the affairs of the Party until a congress to elect new Chairman. There should be no crisis. My appeal to everyone is that there should be peace. Appeal committee has done their work. There is no reason to quarrel. One faction of the party cannot inside while others be outside. Because of the resistance and agitations by those suspended, we need to leave and not make the place a crisis zone."