Home » NEWS » NDU VC adds another feather to his hat

NDU VC adds another feather to his hat

Posted by CREEK NEWS WEEKLY Posted on 8:43 AM with No comments 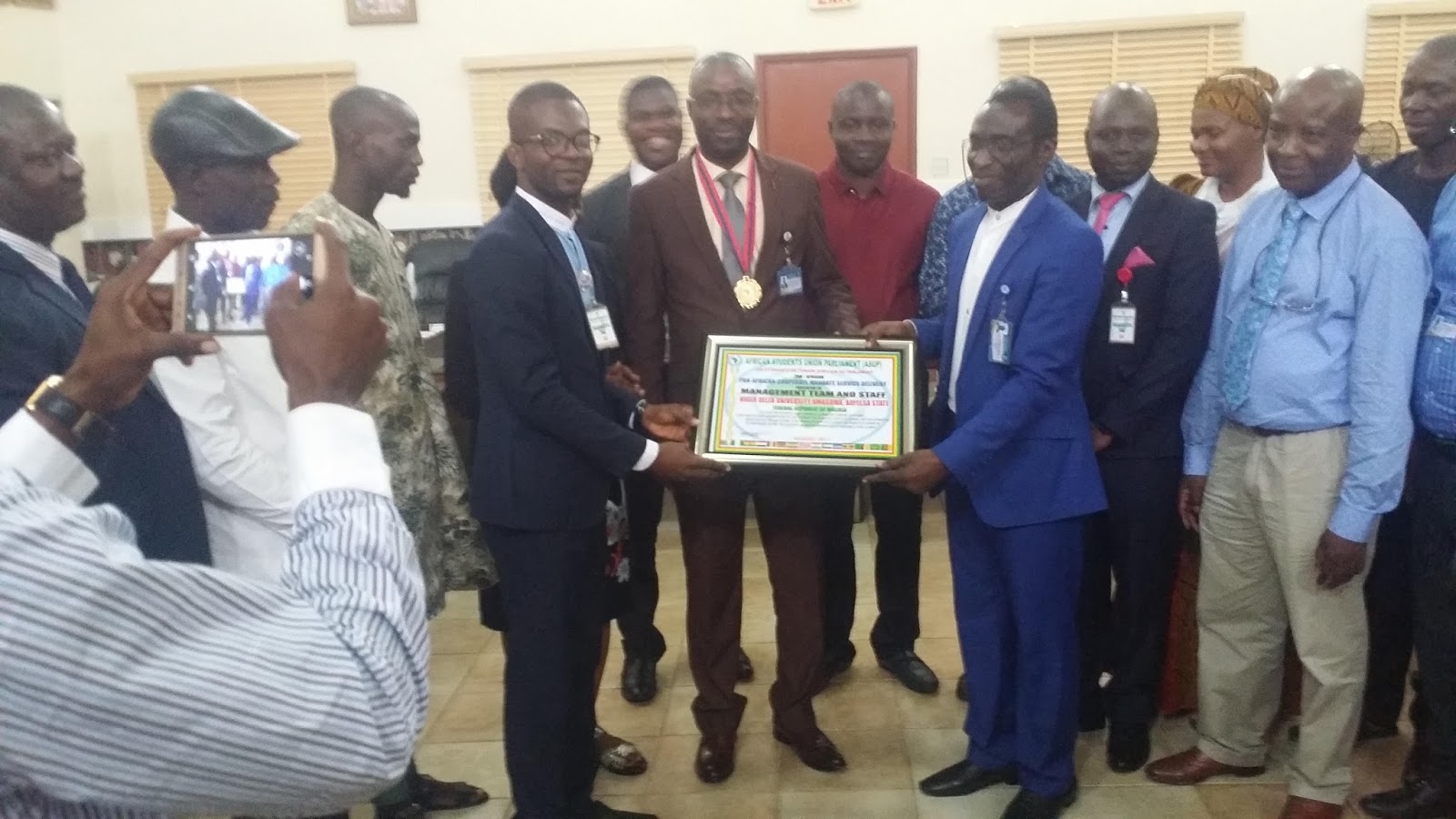 The vice chancellor of Niger Delta University, Prof. Samuel Gowon Edoumiekumo has added another feather to his cap for his patriotism, courage and service delivery in office.
This is coming from the African Student Union Parliament, Accra Ghana, who crowned him one of the Pan African distinguished leadership award at Amassoma, Bayelsa state.
The Speaker of the parliament Rt. Hon. Kewue Mensah Abe of the Institute of Professional Studies, Medina, Accra Ghana who was represented by the Deputy Clerk, Comrade Ozim Temple from the Federal University of Technology, Minna described Prof. Edoumiekumo as a detribalized person worthy of emulation for his academic pedigree, adding that he performs his duty creditably in any office entrusted to him through his open door policy, and besides he is the youngest vice chancellor in Nigeria.
In his remarks, the Majority Leader, Hon. Lavonata Chekibe of the Universite De Cocodi, Abidjah Ivory Coast commended the vice chancellor for his immerse contributions towards the development of Africa saying that he merited the award.
He said that the Africa student Union Parliament is prepared to give awards to deserving personalities in Africa but not vague politicians with their propaganda antics while in office.
According to him, Prof. Edoumiekumo’s choice of nomination is based on his truthfulness, development initiatives, research, welfare and creation of job opportunities for the society as no one can develop Africa but by Africans.
Furthermore, the Majority Leader disclosed that they came to NDU for two reasons: To partner with the University on campaign for drug abuse in the school and re-invigorate Pan Africanism idealogy.
Responding, Prof. Edoumiekumo expressed his happiness to see youths in African to fight drug abuse especially in university campuses.
According to him, NDU too has a fair share of this anti-social vice which was unacceptable to the university because it damages the image of the school.
He commended the management team of the University for their support in sensitizing the students on drug abuse and ensures that the best students come out to compete favorably with others in the world.
Prof. Edoumiekumo opined that the award conferred on him by the Pan African Student Union Parliament can spur him to fight corruption as he would make judicious spending a priority in the school, asking students to be cautious in their actions.
The vice chancellor who was also given a five star medal to be part of the student union body promised to work assiduously with them, believing that Europe has gone saturated and decided to come Africa to maintain their economy, introducing fake policies that under develop Africans.
To him, NDU is able to harness their resources within to make the school self reliant and economically vibrant as he equally assured Bayelsans that there is no crisis in the university because the relationship between the students and staff is cordial even though students have the right to protest but let it be done lawfully.