Posted by CREEK NEWS WEEKLY Posted on 4:38 AM with No comments 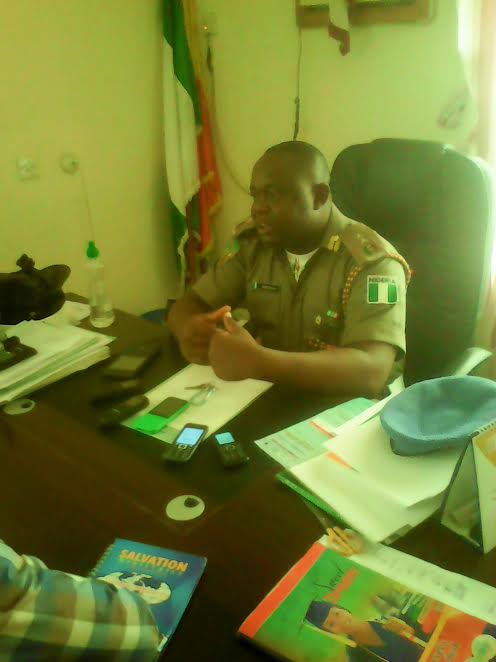 Following the libelous, defamatory and slanderous publication from some persons within and outside the Peace Corps of Nigeria, Bayelsa state command has emphasized the need to shun paper qualification and bank on effectiveness in service delivery if they must make a difference.

The state commandant, Patriot Michael Ware-Ebi dropped this hint in his office during a media chat insisting that PCN is open to graduate and non graduates for recruitment.

Patriot Ware-Ebi who hails from Patani said he has tendered his credentials to the national command of PCN and owed not his subordinates any confirmation.

Ware-Ebi said, although the bill that set up PCN does not indicate a bench mark for employment but encouraged all Patriots to develop themselves academically, in some cases even gives financial assistance, as education is essential in human endeavor.

He explained further that, the bill does not prescribed any
educational qualification to man any position but that who so ever is holding any position before the presidential ascent will remain there until otherwise, noting that there will also be a time frame for reshuffling if the need be.

The said false publication which claimed that Ware-Ebi is not a Bayelsan, making one to wonder if military and para-military personnel trade across tribal lines.

Investigations revealed that Patriot. Ware-Ebi bagged his first degree from the department of sociology and anthropology at the Imo state University (IMSU) and is currently running his masters degree program at Enugu state University of science and Technology (ESUT).

We also learnt that this same unscrupulous elements who would stop at nothing in pulling down their leaders, some months ago, accused him for financial embezzlement which he cleared himself at the national command of the PCN, accused him of raping a female Patriot and now
making an attempt to tarnish his image with a certificate sager.

Ex-military personnel Mr. Lokoson Ebizimo said, issues of certificate cannot determine the effectiveness of PCN looking at the structure of military all over the world.

Lokoson said, in global military academy, cadet officers are being trained by Non Commissioned Officers (NCO), Physical Training Instructors (PTI) in charge of drills, who are all non graduates, yet produces the best combatants.

According to him, non graduates takes charge of map reading which directs there part in times of war, service writing, which is radio cord for communication and military laws that guard every military personnel