Posted by CREEK NEWS WEEKLY Posted on 11:51 AM with No comments 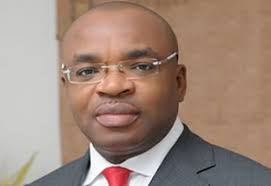 The Akwa Ibom state Independent National Electoral Commission, AKISIEC, has declared the  Peoples Democratic Party, PDP, as the winner of all the 31 Local Government Areas election in Akwa Ibom state conducted on December 2, 2017.

This was contained in a press statement signed by the AKISIEC chairman, Elder Aniedi Ikiowak to journalists in Uyo Akwa Ibom state capital, at the end of collation.

The statement reads in full," the chairman Akwa Ibom state Independent Electoral Commission wish to the state that the local government elections conducted on December 2, 2017 was done in line with the relevant laws".

"That the said election was contested by 12 political parties and the PDP won 31 chairmanship and 329 councillorship seats respectively.
This statement confirmed the announcement/declarations made by the authorized returning officers in various wards and local government areas".

“Details of scores as submitted by our field officers will be made available by the field operators/logistics department of the commission. The commission expresses appreciation to the stakeholders and the good people of Akwa Ibom state for the good conduct exhibited during and after the elections".

Although the elections have been reported peaceful as a buildup of the 18, 2017 Anambra state governorship election, hitches were recorded.

At unit 1, ward 1, in Essein Udim LGA of the state, the Presiding Officer, Mr. Godwin Anthony Udoma said, there was no result sheets to record and announced the results at the unit level due to chaos, before taking it to the local government area secretariat as well as the state secretariat for proper documentation.

Mr. Udoma said, the Returning Officer is waiting for all the party agents for the signing of the result sheets somewhere which he did not disclosed.