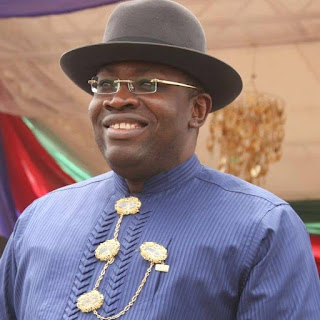 Governor Dickson
The Joint National Association of Persons With Disabilities, Bayelsa state chapter has tasked the state government led by Henry Seriake Dickson to take immediate action to tackle the plight and raise their status in the state.

State chairman of the body, Comrade Binaebi Duodu said this during the 2017 International Day of persons with disabilities celebration at the Peace Park in Yenagoa.

He appreciated the state government and assured the government of its member’s unflinching support and cooperation to move the state forward.

According to him, the theme of this year celebration “Transformation Towards Sustainable and Resilient Society for All” is apt and suggestive towards the restoration and upliftment of challenges affecting disables persons in the state.

He called on the state government to place priority on the welfare and empowerment of persons living with disabilities by way of providing skills acquisition to enable them to self-reliance.

Comrade Duoduo also called for more empowerment programmes for the association on the following areas such as provision of a monthly stipend to members, a robust skill acquisition programme, gainful employment, bus and tricycle to run their activities daily.

He however called on members to be focus and adhere to the saying that, in every disability, there is an ability to develop their God’s given talents to assist themselves and what society would appreciate.
Earlier speaking, the commissioner for Women Affairs and Social Development Mrs. Martha Jenakumo said the state government has put modalities in place to help the physical challenged persons in the state.

She also noted that, this year celebration brought stakeholders to the fore to confront the challenges facing them.