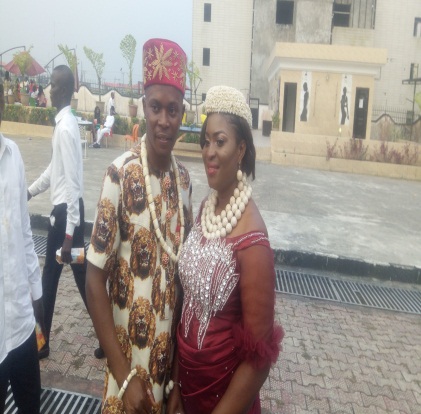 It was pomp and pageantry as friends, top government functionaries, politicians and well-wishers thronged the Exodus Victory Gospel ministry, Yenagoa, Bayelsa state for the solemnization in holy matrimony between Adimiekumo Monalisa Gbefa and Engr.Bodise Lebrun Bolou-Sobai.

Amb. S. J. Edafe, the General Overseer of Exodus Gospel Ministry in his charged the couple that the foundation of every marriage must be built on pure love but not by flesh.

Edafe stated that, God never plan marriage for compatible couples but rather is for the couples to complement each other like he did to Adam and Eve.

The clergy emphasized that the combined efforts of the couple would be source of strength and prayed God to make the union fruitful.

Engr. Omonibeke David who chaired the occasion expressed appreciation to all those who attended the ceremony and urged the couple to tolerate each other in other to make a successful home.

Engr. Torunarigha Cash, a colleague to the groom enjoined the couple to build their marriage on patience, love and tolerance for each other and settle their differences within them and never confide to the third party, adding intending couples should be God fearing and prayerful.
.
Speaking to newsmen after the ceremony, the groom Engr. Bodise Bolou-Sobai expressed gratitude to God for a successful marriage, saying it is a dream come true and described his wife as a humble, God fearing wife.

He advised spinsters and bachelors to be patient, wise in choosing a life partner and prepare their marriage based on the level of their finances.

In her speech, the bride Mrs. Adimiekumo Bolou Sobai said, her joy knew no bound for finding her missing ribs and thanked God for a successful marriage.

She said her husband is a loving, caring, kindhearted man and advised young ladies believing God for their life partner to be prayerful.