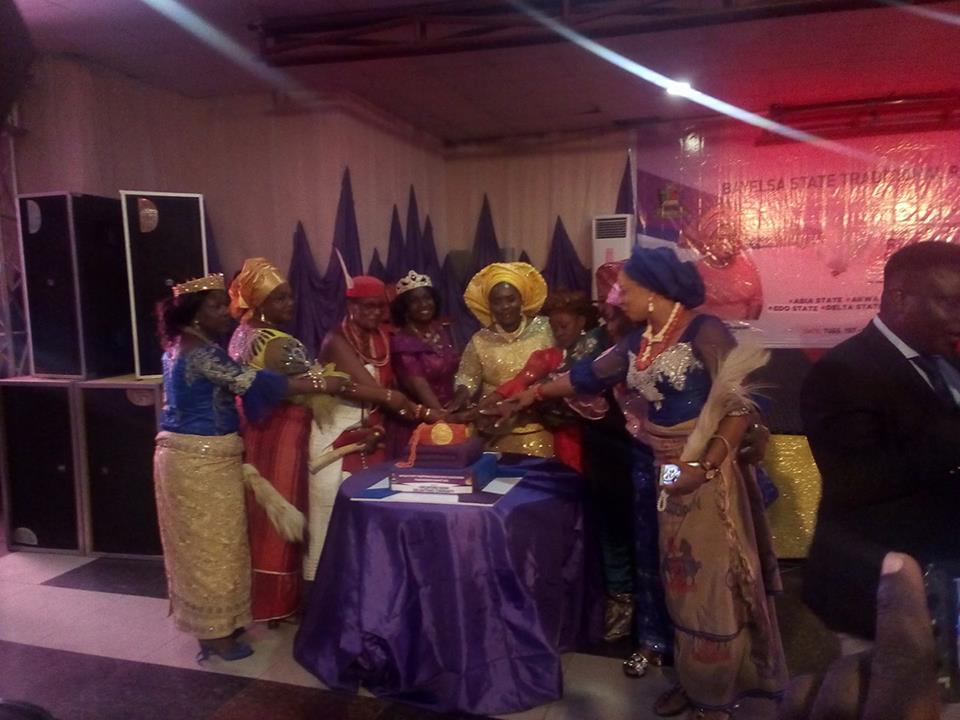 Dr.(Mrs) Rachael Dickson (middle) cutting the cake at the occasion
By Daniel Domotimi

She said, "if you have a niece or a cousin, sister or a friend who is pregnant, please call them for us, we want to see them, we will even pay them for being pregnant for us", she added.

Mrs. Dickson also urged Queens of the region to take advantage of their positions as mothers of all, to better the lives of women in the society through advocacy campaigns which will focus on girl child education.

Shortly after the event, the chairperson, National Association of Women Journalists (NAWOJ) Bayelsa state chapter, Mrs. Maria Olodi Osumah and the Press Secretary to Her Excellency, Mrs. Joyce Ogiowo threatened to deal with any journalist who misconstrued the package the First Lady promised for pregnant new girl child.

She said that "We own the practice of journalism in Bayelsa state and as such dictates the activities of every journalist in our area."

The atmosphere amongst journalists at the event center was brought to a halt when the correspondents of Guardian newspaper, Mr. Julius Osahon and The Nation newspaper Mr. Michael who cautioned her for trying to gag the press, saying that journalists are free to
disseminate information in line with the constitutional provision of the law.

Earlier in the program, the Chairman Bayelsa State Traditional Rulers Council, King Alfred Diete-Spiff in his welcome address said, Royal Mother's must be part of the equation of nation building by engaging the youths, noting that there is no Royal Mother who is not a mother
of a kingdom.