Posted by CREEK NEWS WEEKLY Posted on 6:30 AM with No comments 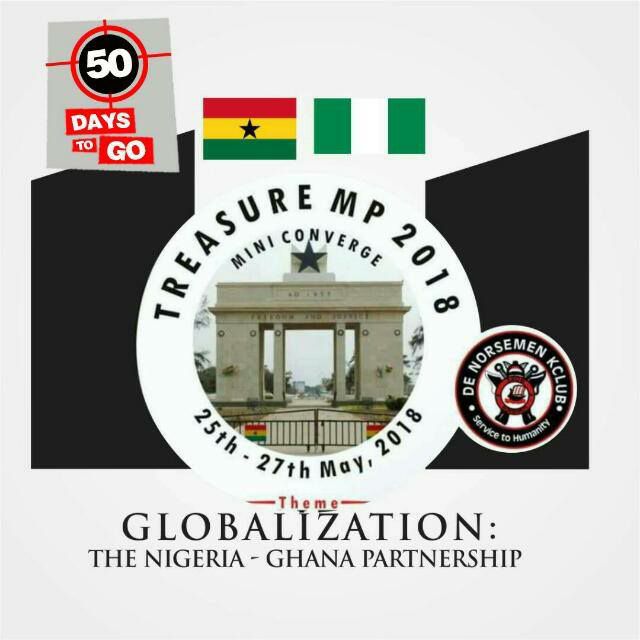 Participants in a 3-day International Mini-Converge organised by DE NORSEMEN CKLUB INTERNATIONAL has called on the Government of Nigeria and Ghana to revamp the long lasting relationship between the dual
that have existed in the past.

They made the call at the Ghana Institute of Management and Public Administration (GIMPA) Accra, Ghana while exchanging views amongst members from Brazil, Indonesia, South Africa, Philippine and some
Asian countries of the world on rendering "service to Humanity" as a sole aim of the KCLUB's existence.

The international President, Dr. Shola Giwa in a key note address,centered on the "Theme, Globalization; The Nigeria-Ghana Partnership", said that the significance of this Mini-converge is to reflect on the core values that will promote unity, draw attention to the essential ingredients that will help to deepen the friendship, refresh the
ideals and strengthen the relationship that have existed between the two countries.

The address reads in part "Nigeria-Ghana relations dated from colonial time with relations rooted in their history as colonies of the same British colonial power.

"The two countries shared similar interests as at the time of independence of Ghana in March, 1957, having inherited from the British government a common official language, common legal, administrative and educational systems.

"These partnerships assist in boosting trade, economic growth and cultural integration within the sub-region. Let us equally note that such collaborations were part of the vision of the founding-fathers of the Economic Community of West African States (ECOWAS) when the regional body was established about four decades ago.

"On our part, DE NORSEMEN KCLUB INTERNATIONAL will continue to encourage its members in Ghana to promote trade, business and cultural partnership with their Ghanaian counterparts." Giwa added.

Shortly after the lecture series, a guess Speaker, Col. Abdul-Manaf Yusuf in an interview with our correspondent said, "I will want to be part of the NORSEMEN KCLUB even though this is my first time of witnessing this event.

"I commend the rank and file of the KCLUB, the organization have a resemblance of Military formation in discipline as I observed and that  attribute to the success of the organization", he revealed.

Talking about the porous Nigeria Boarders, Abdul-Manaf said, boarder agents should refrain from personal aggrandizement of satisfying themselves, instead of working according to the details of the work
and owning it as a national duty, they see it as a way of making money.

On her part, the Director, Community Youth Cultural Centre (CYCC) Accra, Mrs. Akasua Abdallah said, Ghana is a country that believes in upholding the African ideals in line with the philosophy of the NORSEMEN KCLUB.

Earlier, the Governor of DE NORSEMEN KCLUB in Ghana, Mr. Eddy Awala expressed his profound gratitude to all who have contributed in one way or the other towards the success of the converge.