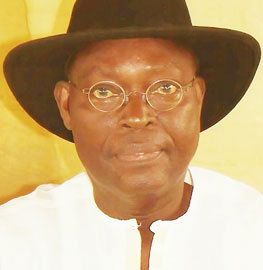 Prof. Kimse Okoko has once again lambasted the establishment of the University of Africa, Toru-Orua Bayelsa state.

The ex-Ijaw National Congress (INC) president while, speaking as the chairman of a lecture entitled “Philosophy and Religion in National Development” in Amassoma said it is “stupidity” to establish the institution without adequate funding of its counterpart - Niger Delta University (NDU),

However, he stressed that there is nothing wrong in establishing a new university but there is need to expand the existing Niger Delta University, fund it well with a view to admit more students and perhaps make Toru-Orua another campus of the university with additional faculties.

He also condemned the hike of tuition fees at the Niger Delta University as unimpressive decision by the Bayelsa state government, knowing full well that Bayelsa is a civil servant state.

He described political leaders particularly governors, national and state of assembly members as looters, sucking the Nigeria treasury dry with impunity, adding that some may end up in jail at last.

According to him, the 1999 constitution is an aberration which cannot develop Nigeria except the document is restructured in way that would give room for attitudinal change of the people and leaders in the country.

In a way, Prof. Okoko sees philosophy as study of nature and religion as a group of people who worship God and gods towards the development of the society.

In another development, Prof. Antonia Essien of University of Uyo, Akwa-Ibom state has called for the introduction of a new religion to be based on order, love and progress.

This, she said, should be made mandatory to be taught in schools for national development although Prof. Okoko kicked against the idea.