Home » ENTERTAINMENT » We won’t let down our fans – 2geez Twin

We won’t let down our fans – 2geez Twin

Posted by CREEK NEWS WEEKLY Posted on 10:42 AM with No comments 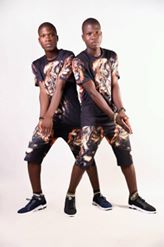 2geez twin
A Niger Delta musical group popularly known as “2geez twin” has said that they won’t let down their fans.

The identical twin Godgift and Godwin started their music career at the age of seven.

Just like P-Square, six years after, they dropped their first single titled “Over” featuring DJ Solar B. The identical twin - 2geez- is grateful to their fans all over Nigeria for putting them through.

“We won’t let their down our fans as we will do our best to put smiles on their faces”, they said.

They hope not to be the likes of P-Square who get separated after being together for years, praying God to open their way and reunite them.

The identical twin - 2geez - also thanked other twins all over Nigeria for doing their best and supporting them.

However, the 2geez will like to hear from their fans through their social media handles @2geez twin.