Posted by CREEK NEWS WEEKLY Posted on 12:19 PM with No comments 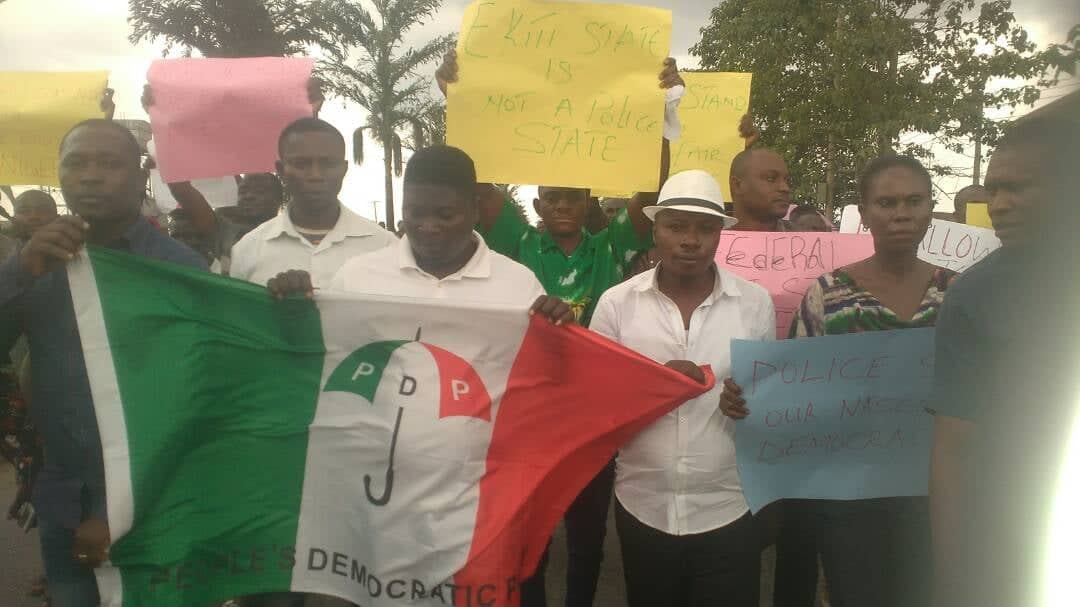 Uncertainty has continued to envelop the political atmosphere, as the Bayelsa state police command rejected a letter of the Peoples Democratic Party (PDP) to embark on a peaceful protest against the alleged brutalization of the Ekiti state governor, Mr. Ayodele Fayose.


Our correspondent gathered that members of the PDP had converged at the party secretariat earlier in the day before moving in a procession to the police command headquarters to present their mission to embark on the planned protest.
Our correspondent reports that the police commissioner Mr. Don Awunah was said to be out of town on official assignment and cannot receive their letter of protest.
It was further learnt that no top ranking official of the command was on ground to receive the protesters.
The secretary Mr. Keku Godspower told the police officers at the gate that they were there to present a protest letter on the instruction of the National secretariat in solidarity of the governor of Ekiti state.
Party faithful return back to the secretariat dejected and frustrated.
It could be recalled that police in Ekiti state tear-gassed PDP supporters at a rally in Ado-Ekiti on Wednesday, in which the state governor Fayose alleged that he was manhandled by the police during the course of the rally.
Meanwhile, our correspondent reports that the People's Democratic Party (PDP) in Bayelsa, have urged the Independent National Electoral Commission (INEC) and Federal Government to ensure that Saturday's governorship election in Ekiti State is peaceful.
The state Deputy Chairman of the party, Chief Numokari Walter, said this while speaking during the protest match by the leaders of the party over the humiliation meted to Governor Ayodele Fayose by the security agents.
The Deputy Chairman, who led hundreds of the members of the party to the state police headquarters, noted that Nigerians and international communities are watching how the election in Ekiti would turn out to be.
He said, "Office of the governor must be respected, we are in democratic governance, we are not in military era, we condemned any act of dictatorship that is why we called on all Nigerians to condemn this act.
He urged the people of Ekiti to stand firm on their mandate to entrust it on the person of their wish. The State Secretary of PDP, Keku Godspower said that the party had to protest all over the country because the fundamental rights of the people of Ekiti has been threatened.
He said, "Since APC took over this country about three years ago, the country has witnessed several killings, Human Rights abuses, intimidation and several treat to peaceful existence in this country."