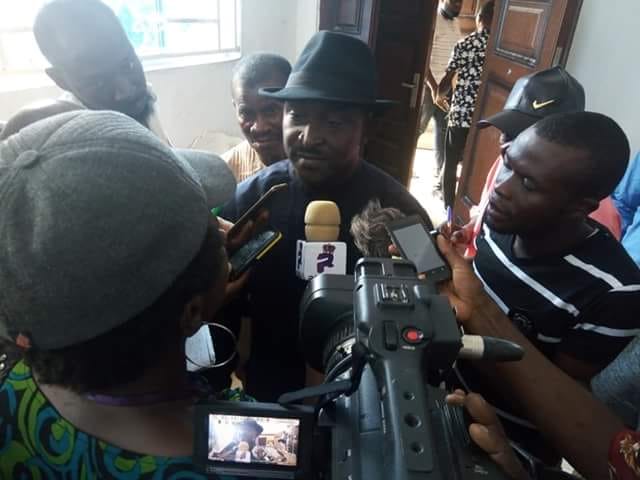 Mr. Inokoba speaking to journalists at the Bayelsa PDP secretariat in Yenagoa
By Daniel Domotimi.

In a bid to right the wrongs of the outgoing member representing Kolokuma/Opokuma constituency 1in the Bayelsa State House of Assembly, Mr. Waripamo Inokoba has joined the race to change the narrative of the area.

Mr. Inokoba stated this after he submitted his People's Democratic Party (PDP) nomination form while speaking tojournalists.
He noted that "in the 1780's, the American constitution was designed with a tenure system idea that anyone who have ran two tenures must have exhausted and
should give way for fresh lease of ideas.

"As a faithful, loyal and committed servant of the PDP who have served the party for many years, the time has come to take the mantle, "Inokoba added.

On what to be brought differently, Inokoba said, "it will be
empowerment all the way, through a working synergy with international donors like the UNICEF, World Bank, International Monitoring Fund (IMF) amongst others.

Sources close to Government House Yenagoa said, already Governor Henry Seriake Dickson had earlier told the present crop of members in the state assembly who have stayed for more than two tenures not to re-contest.

Dickson is said to have accused them of not reaching out to their constituents and that Bayelsa State need credible new comers to win in the general elections.

However, one of his major rivals is said to have jettisoned the philosophy of Governor Dickson and have purchased the party nomination form through a hired crowd of women from his community.