Posted by CREEK NEWS WEEKLY Posted on 8:08 AM with No comments 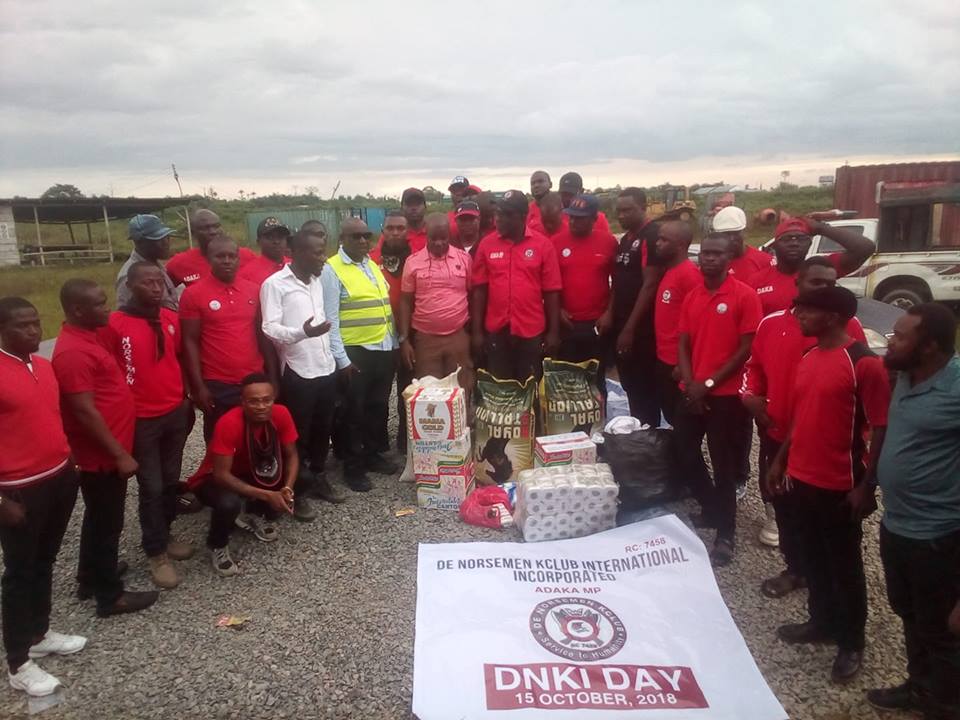 The Director of Information Internally Displayed Persons (IDP) in Bayelsa State Mr. Aduowei Ayi has urged the public to emulate the exemplary gesture of DE NORSEMEN KCLUB, Non Governmental Organizations (NGO’s) and others for donating cash and kind to them.

He made this remark at the Bayelsa State Emergency Management Board (BSEMB) Igbogege,Yenagoa IDP camp when the KCLUB donated relief materials to them part activities to mark their KCLUB internal day.


He said although there are allegations that relief materials were not properly distributed by the authorities in charge of the IDP camps, he still expressed satisfaction of the KCLUB's gesture especially as it came at a time when two pregnant women gave birth in the Ogbia IDP camp.

However, one Dickson Sasime who hails from the host Igbogene community denied the allegations and described it as pigment of imagination by disgruntled elements.

Speaking, the Governor of the DNKI, Bayelsa State chapter, Engr. Sampson Enieni Igodo said October  15  every year is set aside by the KCLUB to identify with the less privileged in line with the KCLUB's mantra of "Service To Humanity".

Igodo also called on NGO's and private individuals to augment what the state government has done in providing a temporal resident to assist the IDP camps.

Igodo said, if cooperate bodies and private individuals could reach out to the less privileged on regular basis, they will not feel the impact of these natural disasters and will be psychologically stable to face their usual endeavors after the disaster.

The Secretary of the Bayelsa State chapter, Mr. Solomon Olali and an elder statesman, Dr. Nelson-Ebimie in their separate chats said, "every right thinking individual or cooperate body must think of giving to society because you must have benefited from the society in one way or the other, that is why we DE NORSEMEN KCLUB have set aside this day to give back to society.

"If giving back to society, it must be to the needy so that the blessings of God can be attracted to all and when we all are blessed, social vices will be reduced to the barest minimum" they added.

Other states that embarked on similar gestures were Enugu, Akwa Ibom and Anambra state chapters, as they visited the Nigeria Prison's Service, (NPS) and in Rivers state it was the Prison and Braithwaite Memorial Specialist Hospital BMH to offset bills of some patients,  while in Edo and Oyo state it was a visit to the orphanage.

The rest are Cross River and Ebonyi state, with the donation of cash respectively to some indigent handicapped and Imo state gave free books to primary and secondary school students.