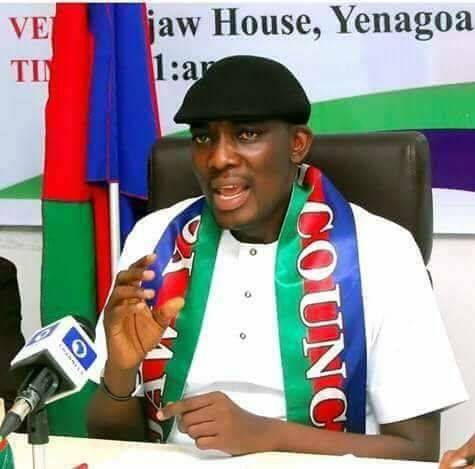 Barr.Pereotubo
The Ijaw Youth Council (IYC), worldwide, is seriously concerned about the delay in the signing of the Final Investment Decision (FID) for the Zabazaba Deepwater Project.

The IYC expressed its displeasure in a statement signed by the spokesman Daniel Dasimaka.

According to the IYC National President, Barrister Oweilaemi Pereotubo,  “We do not want the Zabazaba Deepeater Project to go the way of the Brass LNG which never saw the light of the day. We want jobs for our youths. We want the local economy of the Niger Delta region as well as the national economy in general to grow. We want development in the Niger Delta region. We want peace. Hence, we condemn the unnecessary delay in the signing of the FID for the Zabazaba oilfield”.
Oweilaemi said the IYC is deeply worried that the 2020 first production date of the Zabazaba oilfield may be compromised if the FID remains unsigned.

The $13.5 billion Zabazaba oilfield is located in the Oil Prospecting Lease   (OPL) 245 offshore Nigeria in the Niger Delta of the Gulf of Guinea. Nigerian Agip Exploration Limited (NAE) and Shell Nigeria Exploration and Production Company (SNEPCO) are jointly developing the project. Nigeria Agip Exploration is the operator of the project.  It will be a major boost to the country’s economy and the local content initiative being promoted and prioritised by the present government. In particular, the deepwater project will support small and medium enterprises in Nigeria following the decision by the developers for in-country fabrication and integration of the topsides of the Floating, Production, Storage, and Offloading (FPSO) vessels.

The Zabazaba deepwater field is estimated to hold 560 million barrels of oil equivalent (MBOE), which will increase the country’s daily crude oil production.  When it becomes fully operational, the project is expected to generate at least $8 Billion for Nigeria. The impact on the Nigerian economy would be unprecedented, and the multiplier effect on the local economies of the catchment areas in the Niger Delta will be huge.

Agip and Shell acquired OPL 245, which was named the Zabazaba field, in 2012 for $1.3 billion. The acquisition has been the subject of serial corruption investigations and prosecutions in Italy and Nigeria. Only last Monday, one Nigerian NGO and three International NGOs presented a joint report in which they said Nigeria lost an estimated $6 billion to the controversial OPL 245 deal. Human and Environmental Development Agency (HEDA), Global Witness, Re:Common and the Corner House commissioned Resources for Development Consulting to do the report on their behalf. Agip and Shell have consistently maintained their innocence.