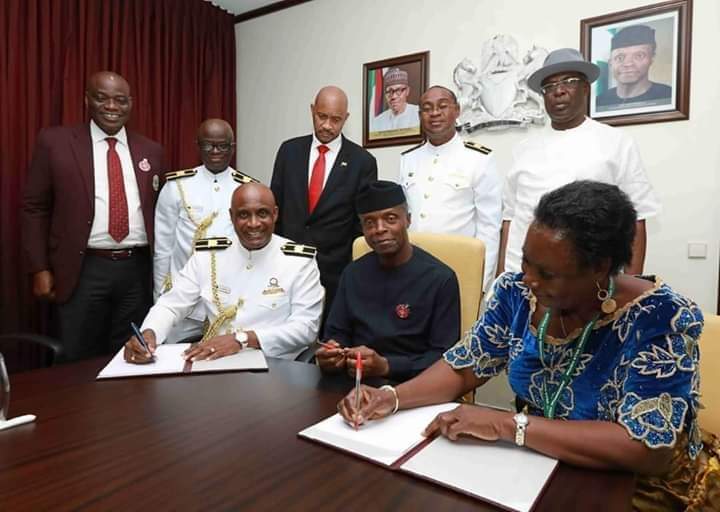 BARELY THREE weeks after the National Universities Commission, NUC, paid a formal visit to the Nigerian Maritime University at the take-off campus in Kurutie, Delta State, the first foreign delegation from Jamaica set foot on the shores of the island on Monday November 19, 2018.

At the head of the team was Chief Timipre Sylva, Chairman, Governing Council of the University who gladly introduced the delegation from the Caribbean Maritime University in Jamaica. The contingent was warmly received by students and staff of the host university.

At the head of the foreign delegation was Professor Fritz Pinnock, President of the Caribbean Maritime University, his second in command, Prof Ibrahim Ajagunna and other leading lights in maritime exploration from the West Indies.

Vice Chancellor of the Nigerian Maritime University, Professor Ongoebi Maureen Etebu, was overjoyed to receive the first foreign delegation to the university, and underscored the strategic importance of the visit. In her estimation, the historic visit was a manifestation of her grand dreams for the university.

She recalled the rudimentary beginnings of the university at the take-off campus in the first quarter of the year, and expressed gratitude over the significant growth of the university within the intervening period. She equally commended the Chairman of the Governing Council for bringing his visionary leadership to bear on the fortunes of the university.

On his part, Sylva declared that he was impressed with the evident show of enthusiasm and eagerness amongst students and staff of the new university. He encouraged students to take absolute advantage of the excellent opportunities at their disposal.

“With the help of our Caribbean friends,” said the former Governor of Bayelsa State and linguistic expert, “we are on course to develop an international curriculum.” Sylva gave assurance of the Federal Government’s abiding passion and commitment to the university, and called on every student to take their studies seriously.

President of the Caribbean Maritime University, Professor Fritz Pinnock, affirmed his university's readiness to enter into collaborative partnership with their Nigerian counterpart. “We have passed the negotiation stage,” said he. “We are now partners because we have common interests."

The team proceeded to Abuja mid-week, where the Caribbean maritime delegation met with Vice President Yemi Osinbajo and other top government functionaries. The occasion witnessed the formal endorsement of a Memorandum of Understanding, MoU, that would be of mutual benefit to the Nigerian Maritime University, Okerenkoko, and the Caribbean Maritime University, Jamaica.

Nigeria’s first maritime varsity was effectively established in October 2017 with a mandate to navigate the country’s full potential in the maritime world. The university took off in earnest on Thursday April 12, 2018, under the pioneering guidance of the nation’s first female professor of Mechanical Engineering, Professor Maureen Etebu.

The subsequent appointment of Chief Timipre Sylva as Chairman, Governing Council, has proven to be a full complement to the leadership compass of the university. As it was at the formal reception for the NUC contingent on Monday October 29, 2018, the visit of the Jamaican delegation to the fledgling Kurutie campus was marked by a colourful parade by pioneer students of Nigeria’s first para-military university