Posted by CREEK NEWS WEEKLY Posted on 11:57 AM with No comments 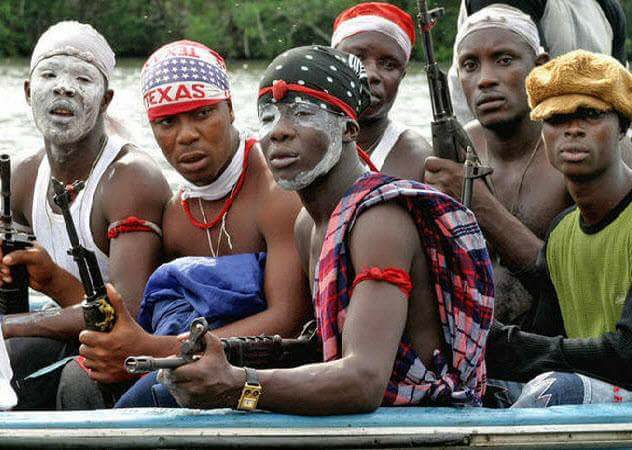 Ex-agitators (militants) have warned criminal elements operating along the East-West Road particularly at the Bayelsa and Rivers axis to keep off the road and allow peace to reign.

Addressing a press conference in Yenagoa, the Bayelsa state capital on Thursday, Chief Kalaiti Jephthah Obadiah 1 who spoke on behalf of the agitators Bayelsa Chapter expressed concern about the kidnapping and robbery incidents carried out by the criminals to disrupt vehicular and business activities of the people.

He described the activities of such criminals as a provocation to ex-militants who worked assiduously in ensuring that peace and transformation in the Niger Delta region reign, adding that if they don’t stop their dastard acts, the ex-militants have no other choice than to engage them battle.

In another development, Chief Obadiah-1 stated that the Niger Delta Development Commission (NDDC) and Presidential Amnesty Programs are purely intervention programs by the Federal Government to placate the nemesis of underdevelopment of the Niger Delta region but however criticisms and protests are bound to trail them which are the children of hostilities, grudge, bitterness and envy of the “pull him down” syndrome.

According to him, the Special Adviser to the President on the Niger Delta Presidential Amnesty Program, Prof. Charles Quaker Dokubo is a fine gentleman of impeccable character and within short time in office, the Niger Delta people enjoyed unprecedented transformation.

He is of the view that Prof. Dokubo has promptly paid ex-militants, issue contracts to people on merit, and social welfare services to ex-agitators is not ignored, etc.

He said all the ex-agitators have pledged to stand behind Prof. Dokubo and resist any professional protests borne out of frivolities and political difference.

Furthermore, the ex-militants posited the appointment of Prof. Nelson Brambaifa as acting Managing Director of NDDC by President Buhari is a welcome development, saying that the man has equally demonstrated his worth to serve.

Chief Obadiah-1 also stated that the Niger Delta ex-militants would remain solid behind him and urged everyone to abstain from frivolous and unwarranted protests against him.

However, he appealed to President Buhari to append his signature and confirm Prof. Brambaifa as the substantive Managing Director of NDDC.