Posted by CREEK NEWS WEEKLY Posted on 8:04 AM with No comments 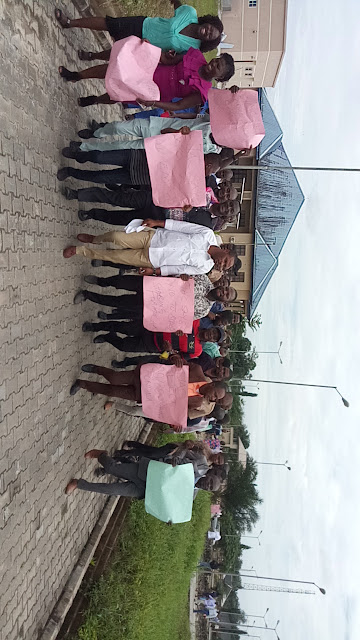 Addressing mammoth protesters, the Ssanu chapter chairman, Comr .Kalizibe Joseph said it was in line with directive from national Secretariat that all branches should embark on three days peaceful protest nationwide against the proposed 80%/20%sharing formula of earned allowance.

Comr.Kalizibe said the unions are rejecting the template been used,adding that issues of Earned allowance is at the discretion of universities and governing council and not on union basis.

He called on management to uses it discretion and come up with a fair workable formula for all staffs of the institutions.

According to Kalizibe "issues of earned allowance is at the discretion of universities and governing council and not on union basis, we know that it is the bursary of the university that prepares what belongs to each staff from federal government.

If it is unions, federal government would have  paid the entire money to Assu National account, and Assu would do same by distributing to its branches.

But because of the honor, there is a CEO and assistant CEO that midwives the processes of this university, the money is already in coffers of university, it then means that the governing council will use its discretion in line with the number of staff and pay accordingly along side the bench mark that is stipulated.

Responding, the deputy vice chancellor Prof.Teddy Charles thanked the unions for their peaceful disposition during the protest, adding that he will communicate their plights to management.