Home » POLITICS » RE: ALAIBE SHOULD APOLOGIZE TO PDP

RE: ALAIBE SHOULD APOLOGIZE TO PDP

Posted by CREEK NEWS WEEKLY Posted on 9:49 AM with No comments 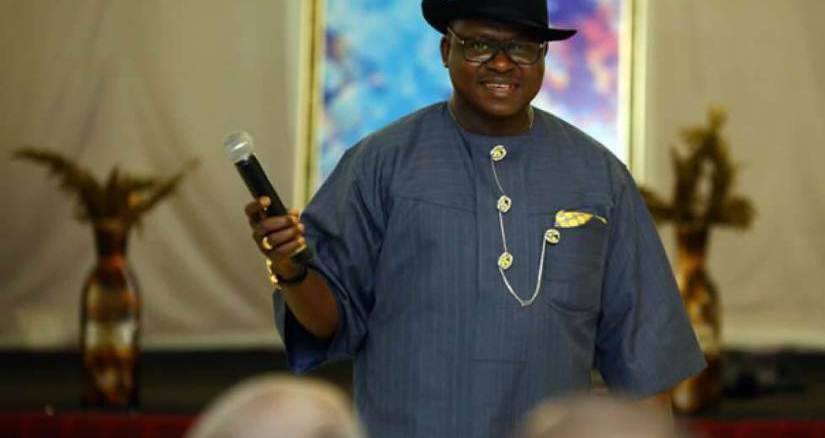 Make Bayelsa Great (MBG) is a socio-political group formed by professionals of different endeavors, in pursuits of good-government and social justice. We seek to advance the cultural, social, economic, and political well-being of the Bayelsa people, by all honorable means.

The MBG have been watching events in the political turf in the recent past and are appalled by the activities of some phantom groups masquerading under the guise of the People’s Democratic Party (PDP) to cause disaffection among members of the party.

A case in point is recent activities of a fake group under the pseudo name of Bayelsa State (PDP) “Restoration Foot Soldiers”, calling on Chief Ndutimi Alaibe to apologize to the PDP.

Ordinarily, we wouldn’t have replied to the ranting of this fake group, but for the benefit of the public, there is need to set the records straight, so that gullible minds will not be tempted to take the fallacies of this group hook line and sinker.

Furthermore, we wish to make it clear that the sponsors of this group who are political jobbers whose stock in trade is to create confusion, so that they can refill their dried bank accounts for their selfish aggrandizements, these evil machinations will not see the light of the day.

We wish to state as follows;
That this fake group of fraudsters use the phrase PDP “Restoration Foot-Soldiers”, to make believe that they are working for the State Governor, Rt. Hon. Henry Seriake Dickson, while they are not, but out to fan the embers of discord between the Governor and Chief. Ndutimi Alaibe.
We wish state categorically here, that there is no dispute between Governor Seriake Dickson and Chief Ndutimi Alaibe. The sponsors of the fake group “Restoration foot-soldiers” only in their mischief wants the world to believe that the Governor is behind their activities, but we know the Governor is not anyway connected to the group.

Our checks showed that the fake group “Restoration Foot-Solders”, is not known anywhere prior before this time and the person who signed the press statement used a fictitious name, the trade mark political jobbers to create the impression that the group is in existence for their pecuniary benefit.

It is foolhardy when the fake group admitted that “Alaibe has the constitutional right to contest the forth-coming Governorship election in Bayelsa, but Alaibe, without publicly apologizing to all loyal members of the PDP in Nigeria and especially in Bayelsa is not qualified to be called a member of the PDP much less contesting any election on the platform of the party”.
It is worthy of note here that the so called “Loyal Party Members” is a figment of the imagination of the sponsors of the statement, because Chief Ndutimi Alaibe as a disciplined party man consulted widely with party stakeholders before returning back to the party amidst celebrations galore in Yenagoa. At the event Chief Ndutimi Alaibe said, “all the positions I held in Nigeria today was made possible by the PDP, so I am happy to be back home”.

Alaibe worked assiduously for the PDP in the last State and National Assembly elections and duly delivered all available seats in his constituency and Senatorial zone to the PDP.

At different fora, Chief Ndutimi Aliabe has taken time to explain reasons for withdrawing from the Governorship contests and has consistently emphasized that the blood of the people is not worth his ambition, noting that he doesn’t want to create widows and orphans because he wants to be Governor of Bayelsa State.

Let it be known to these political miscreants that anybody who aspires to be Governor has supporters and followers. It’s true some highly respected Party chieftains accompanied Alaibe to pick up his Nominations form at Wadata plaza. But is that enough reason for them to drag the name of the former President Dr. Good luck Jonathan into their statement, if they’re not shenanigans?

While admitting that Chief Ndutimi Alaibe has the constitutional right to contest for the seat of Governor of Bayelsa State. What is against the principle of natural justice, equity and good conscience? It is a fact that the Presidential candidate of the Party in the last Presidential elections, Alhaji Atiku Abubakar defected from the All Progressive Congress (APC) to contest on Party’s platform. Similarly, the former Senate President Dr. Bukola Saraki also defected from the (APC) to contest in the Kwara Central Senatorial District elections, yet these political charlatans believe Chief Alaibe is their problem because he defected from a political party.

We admonish these political jobbers to work towards the ‘Victory’ of their pay-masters at the September 3rd 2019 primary election of the party, rather than casting aspersions and vilifying an aspirant who is going about his consultations with stakeholders for the upcoming contest.

Consequently, we put it to them that no matter the manner of subterfuge and shenanigan they employ, their evil and diabolical plans will surely fail, because Chief Ndutimi Alaibe will surely contest the PDP primaries and is poised to win the race. We call on all well-meaning party members to ignore the statement of this fake “Restoration Foot Solders”, because they are being sponsored by the opposition to cause confusion in PDP, so that they will take over power in February 14th 2020, but God forbid.