Posted by CREEK NEWS WEEKLY Posted on 8:28 AM with No comments 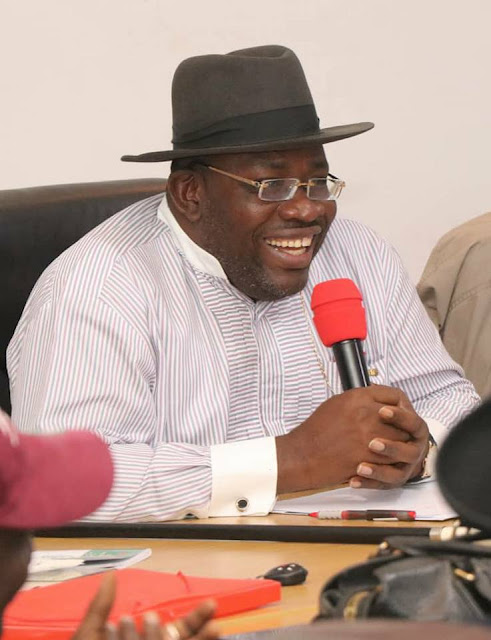 The Peoples’ Democratic Party, PDP, in Bayelsa state may lose Bayelsa guber to All Progressive Congress, APC, if information reaching Creek News weekly is anything to go by.

According to reports emanating from Bayelsa state, Governor Dickson who is the leader of the party allegedly have interest on one of the governorship aspirants Senator Douye Diri as governor and Barr. Lawrence Ewuhdjakpo as deputy.

News of this spread like a wild fire in the state capital but political analysts who preferred anonymity viewed Dickson’s alleged interest as political advantage to curry his favorites to the detriment of other aspirants’ chances to win at the party primaries billed for September 3, 2019 in Abuja.

The analysts say that Governor Dickson’s interest on Senator Diri’s did not weigh adding that if he bents on that decision, the PDP has become history.

It would be recalled that Governor Dickson conducted local elections for chairmen and councilors of the state to secure more delegates for his alleged choice of aspirant to be installed as the next governor.

The analysts opined that it has become the practice of political party leaders particularly the ruling party used delegates as a priority to win elections from the time of ex-president OBJ’s regime.

They further noted that this arrangement is not interesting to party members as they are not allowed to exercise their right to vote for aspirants of their choice, saying that this underscores development of the people.

Governor Dickson is quoted as saying that he is leaving behind big shoes for any aspirants to take over from him next year and left Bayelsans flabbergasted about who might fit into his shoes.
At a forum, he says that a “tenant” or “errand boy” cannot be governor of Bayelsa state without his “knowledge” which some Bayelsans believe he is referring to former NDDC managing director, Chief Timi Alaibe.

He also said that "Those who are boasting that they will take primary away to another state, let me tell you that cannot happen at all they are not in control, they are just making mouth. OFURUMAPEPE is in Charge"

Meanwhile, Alaibe in a reaction was bold to say that he is too focused to be distracted by Governor Dickson’s pronouncements.

His campaign organizations said “Our focus is to conduct our campaign on issues that will lead to the development of Bayelsa State through a shred economic prosperity and not waste energy and time on commonplace matters’.

‘Since the beginning of the search for a successor to Dickson, and in spite of provocative and insulting statements by certain individuals and groups, including serving commissioners in the state, this is the first time we have decided to say enough is enough.

Our silence should not be misconstrued to mean timidity, fear or any such thing. It was basically and still a measure of the respect we and our Principal have for the person and office of the Governor. Unfortunately, that respect has not been reciprocated’.
A ll efforts to reach the state commissioner of information on this matter proved abortive as calls put across to him ignored.