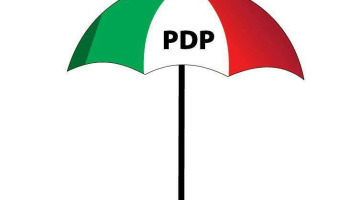 A former All progressive Congress (APC) ward 1 chairman and a grassroot mobilizer in constituency 1, Yenagoa local government area of Bayelsa state, Hon. Watari Kenigbolo has defected with over 2,000 of his loyal supporters to the Peoples Democratic party (PDP).


Hon. Kenigbolo while giving reasons for his defection to the Peoples Democratic Party said as a leader of APC ward 1 since 2014 he has worked for the victory of the APC with no tangible development to the people, hence his decision to dump the APC for the PDP.

He described APC as a party of deceit, thuggery and criminals with no proper structure to win election in Bayelsa state.

He commended Gov.Dickson led administration for the infrastructural development embarked upon in Yenagoa local government and lauded the leadership style of Hon. Oboku Oforji for his youth friendly deposition which have seen him empower hundreds of Yenagoa indigenes.

According to Hon.Kenigbolo" I have been a former chairman of APC ward 1 and the leader of the party since 2014. I am here today to ensure the victory of PDP come November 16, 2019 because I'm sure that PDP is only party that can win election in Bayelsa State.

The APC I belong to has not done well. A party of criminals, thuggery and deceits that has not done anything to enhanced the living standard of the peoples.

Another decampee who is the community development committee (CDC) chairman of Edepie community and treasurer of PDP ward 5, Hon. Goodluck Francis said he decided to join the PDP because APC is a party without a structure and that decisions are taken without consulting with party stakeholders.

Receiving the decampees, the vice chairman central of the Peoples Democratic Party, Chief Lambert Ototo said Hon. Kenigbolo and Hon. Francis have made the right choice by joining the party and expressed the confidence that with Kenigbolo victory for the PDP is sure deal.

He appreciated the political antecedents of Kenigbolo, saying that he is dogged fighter and a firm believer of the ideologies if any political party he belongs.

Also speaking, the member representing Yenagoa constituency 1 in the state House of Assembly, Hon.Oforji Oboku
Said that the flag bearer of PDP, Sen.Douye Diri a well groom politician who has served the state diligently in different capacities, noting that he has what it takes to deliver his campaign slogan "Prosperity 2020" to Bayelsans.

Hon.Oforji further said that for Bayelsa to move forward, there is the need to elect a man that has capacity and that is prepared for governance, and described the APC guber candidate as a rookie who does not have what it takes to govern a state like  Bayelsa.

His words" what Douye us bringing to bear us prosperity and I'm assuring you that he is going to continue in those infrastructure projects that has not been completed by the restoration government by ensuring that they are completed.

Let me correct one impression about those calling Sen.Douye a stooge, he is not a stooge. He is a man well groomed to be governor, the seat of a governor is not for children, it is for people that are well groomed. People must not think that Bayelsa we are going to bring people who will come and learn on the job to be governor of the state."