Posted by CREEK NEWS WEEKLY Posted on 6:08 AM with No comments 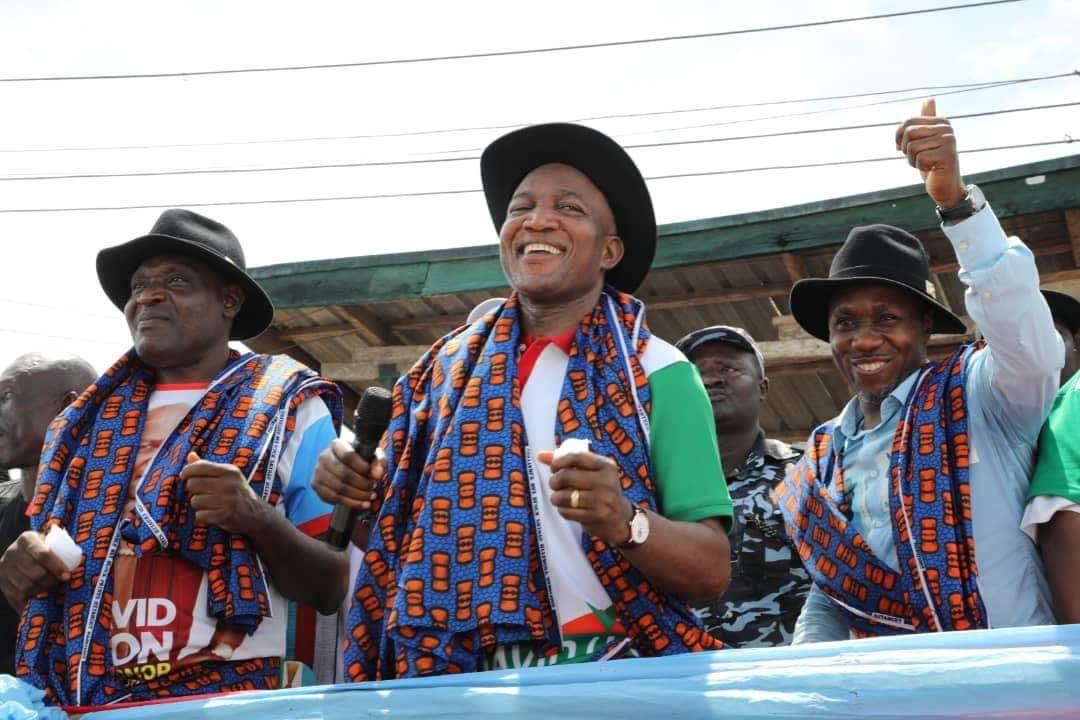 Photo Caption: Candidate of the APC, Chief David Lyon (middle); Senator Biobarakuma Degi-Eremienyo (Left), Deputy Governorship Candidate and Hon. Jothan Amos (Right), State Chairman of APC Bayelsa in Ekeremor Town on Saturday during the APC Governorship Campaign Rally
.
The governorship candidate of the All Progressives Congress (APC), Chief David Lyon, has called for stronger collaboration between government, security agencies and local communities to protect and judiciously use the crude oil wealth for the growth and development of the people.


According to Lyon who is contesting to succeed the incumbent governor, Hon. Henry Seriake Dickson, in the forthcoming November 16 governorship election, the tripod collaboration would help foster speedy development of the oil-rich Niger Delta state.

Addressing a mammoth crowd that received him at Egbemo-Angalabiri Community in Ekeremor Local Government Council, Lyon said Bayelsans still live in penury because the Dickson-led administration failed to protect and invest the common wealth of the people on profit generating projects, thereby causing the people to live from hand to mouth.

He observed that the level of development in the communities does not reflect the true nature of the contributions they put into the wealth and growth of Nigeria as oil producing areas.

He promised that when elected into office, protecting the crude oil wealth of the state from activities of pipeline vandals and crude oil thieves, a phenomenon he said has exposed the Bayelsa State to severe environmental degradation would top the list of his priorities.

Explaining further when his campaign team visited Peretorugbene and Toru-Ndoro Communities, Lyon promised to ensure that all local communities are captured in the Global Memorandum of Understanding (GMoU) of multinational oil corporations operating in the area.

He said whilst he served as youth leader of his community, Olugbobiri in Southern Ijaw LGA, in 1995, he was the first youth leader to sign a GMoU with a multinational oil corporation to secure contracts and jobs for young people, saying leadership of youth groups across the state can take a queue from him.

He declared that only when job opportunities are created to ensure that young people are self reliant that the crude oil resources of Nigeria can be safe. Lyon said this had become more imperative in order to sustain peace and stability of the state, and above all prepare a better and prosperous future of generation of Bayelsans yet unborn.

He revealed that while he is traversing communities to seek the support of the electorate in a responsible manner, his main aim is to also use the opportunity to meet and find out the teething challenges of the people ahead of the governorship poll.

Reiterating his commitment to develop the state when elected as governor, Lyon said he was not only overwhelmed by the love Ekeremor people have demonstrated towards him and the APC, but that he is also marveled by the level of preparedness of the people of the area to exercise and protect their franchise for the APC.

Interacting with the chiefs and people of the various communities, the APC candidate thanked them for their show of courage as flood continues to ravage many communities in Ekeremor, adding that he has no doubt that the people would give his party bloc votes with same courage come 16 November.
While assuring them of his readiness to impact more on their lives, immediately after being sworn in as governor, Lyon promised to complete the Sagbama-Ekeremor Road and commence work at the abandoned Agge Seaport project which he said has the capacity to provide employment for thousands of Bayelsans.

He further said, "as an oil producing communities, you deserve more than the hardship the state government has exposed you to. I understand your condition because my community suffers the same fate. In other words, I am on the same page with you in this struggle.

"If we live in a state where only the right people are elected into office, communities like yours should be enjoying better roads, schools, health facilities and potable water. This time I expect you to do the right thing by voting for the APC to ensure that we change the narrative.

"When I become governor, I would create more jobs for your people, I would lin
k your communities with the outside world through roads, I would build befitting hospitals for you, I would provide better and sustainable educational system for your children. The time to protect and spend our crude oil wealth judiciously has come."

Receiving 150 defectors from the Peoples Democratic Party (PDP) into the APC at Ekeremor Town, the chairman of APC in the state, Hon. Jothan Amos, said that the mood in the state shows that the people are fed up with the PDP-led government.

In all the communities visited, the people lauded him for employing thousands of youths through his oil and gas surveillance contract, and assured him of their preparedness to work for the victory of APC in the forthcoming election.

People from communities in the area endorsed the APC as the campaign tour climaxed with a mega rally in Aleibiri community, home town of former speaker and deputy governor, Rt. Hon. Peremobowei Ebebi, where a humongous crowd gathered to cheer and receive the campaign team despite the rains.

Speaking at the rally, Ebebi said David Lyon has given youths of the area employment opportunities and that he is confident that when Lyon becomes governor the rate of unemployment in the area would drop.

"I know David Lyon very well. He is a proven leader that has empowered and employed our youths with his position as pipeline surveillance contractor. A man with that kind of track record, I am sure would do far better if he becomes governor of the state.

"For the last seven and half years we supported the PDP-led government, what did we gain? They said they are constructing road to Ekeremor, that road is still far from complete, and in five months they would be leaving office. What then can we say is our benefit?