Posted by CREEK NEWS WEEKLY Posted on 7:53 AM with No comments 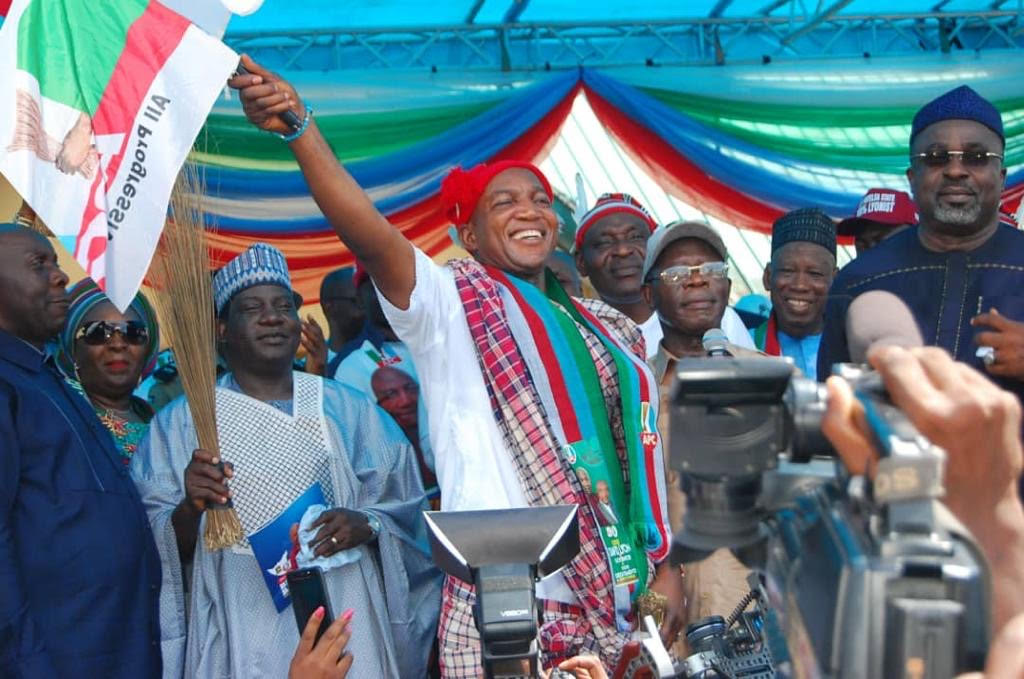 
The governorship candidate of the All Progressives Congress (APC), Chief David Lyon, has promised to work for the rapid economic development of Bayelsa State by reviving the gas turbine in Kolo Creek to ensure adequate power supply in the state within 12 months into office.

Speaking during the flag-off of the party's campaign in Ogbia Local Government Council on Monday, Lyon explained that he is seeking office to right the wrongs of Governor Henry Seriake Dickson and his Peoples Democratic Party (PDP) government.

He said that his government would build and make good economic policies that will encourage investments in the state as well as provide jobs to the youths.

Lyon also promised to work assiduously to provide security for all Bayelsa people, having employed and empowered thousand of youths across the state to join hands with him to protect the nation's oil assets for the good of the people as a private man.

He said: “I am a man of a few words. I promise the people of Bayelsa, I will not fail them. Bayelsa money will be used for the good of all. I am coming to serve Bayelsans and not for them to serve me as it is the case today.

“There is insecurity in Bayelsa at the moment, we will handle it adequately. I will work for the development of our state, there will adequate power supply in Bayelsa under my administration, our gas turbine will be revived, we will enjoy 24 hours power supply in our state”, the candidate pledged.
Dignitaries who attended the rally include: Deputy President of the Senate of the Federal Republic of Nigeria, Senator Ovie Omo-Agege; National Chairman of APC, Comrade Adams Oshiomhole; Governors Abubakar Bagudu (Kebbi); Abdullahi Ganduje (Kano) and Simon Lalong (Plateau).

Speaking at the rally, Oshiomhole assured Governor Seriake Dickson that the party's governorship candidate will not witch-hunt him when the he wins the November 16governorship election.

He said, “my appeal to my dear friend, the outgoing governor of Bayelsa State, Dickson, because I understand the withdrawal syndrome facing any governor close to the end of his tenure.

"But I want to assure him on behalf of David Lyon that he is not coming to witch-hunt him. He is only coming to correct some of his limitations. Under Lyon’s watch, Bayelsa shall witness life more abundant for the youths, women and the elderly.

“I want to appeal to the PDP, we are coming for a contest, and not to chase away the outgoing governor the way Dickson chased and fought with barrel of guns to change the State Assembly Speaker last month.

“APC is coming to make a difference in Bayelsa as a party of change, Lyon will not betray those who stand by him. He will carry the youths along, he understands the language of poverty, he understands the deprivation which this state and people of the South South went through, and that is why he decided to fight for justice."

In his remarks, Director General of the Bayelsa APC 2019 Governorship Campaign Council and Minister of State for Petroleum Resources, Chief Timipre Sylva, reassured Bayelsans that the candidate of the APC would provide jobs for the teeming unemployed youths in the state when elected into office.

He said in the first 100 days in office, Lyon would engage the restive and jobless youths to help secure the state just as he secured the nation's wealth through pipeline surveillance contract over the years.
According to Sylva, "what we in the APC are bringing to you is development, empowerment and security. Today in Bayelsa State, insecurity is the order of the day. Killing, armed robbery and kidnapping is the new normal.

"The unfortunate thing is that when armed robbers enter your house, what they are after is your pot of soup and not money. Dickson has impoverished Bayelsans.  All they think of now is only how to get food to eat. That will not be the portion of Bayelsans anymore. The man we are bringing to you is a security, empowerment and development expert".

Before the rally commenced, Sylva led the dignitaries to the secretariat of the Ogbia Brotherhood, the apex socio-cultural organisation of Ogbia people, for a meeting with the leadership and members of the group.  At the meeting, Oshiomhole submitted that the continuous attack on APC’s governorship candidate, Chief David Lyon, by members of the Peoples Democratic Party (PDP) confirms the fact that his party fielded a stronger and better candidate for the November 16 election.

He said, "Lyon stands as an example to young people that when you serve your community, your state and stand on the side of peace to protect national assets, time will come when you will be given the mandate to preside over affairs of state.

"I think that is the story of Lyon. The way the PDP has reacted to his nomination shows that we have made the right choice. I told somebody that if you appoint an Inspector General of Police and you begin to receive congratulatory messages from criminals, realise that you have made the wrong appointment.

"But if you appoint an Inspector General of Police and you begin to receive condemnation from criminals that the man is a bad man, know that you have made the right choice. That is the case of the PDP with the candidate of the APC in Bayelsa State."

Giving his blessings to the governorship candidate of the APC and his running mate, Senator Biobarakuma Degi-Eremienyo, Deputy Chairman of Ogbia Brotherhood, High Chief Alfred Singer, thanked the APC led Federal Government for appointing some sons of Ogbia Kingdom into office but frowned at the fact that Ogbia is still backward in terms of infrastructural development.

He said, "Ogbia kingdom is the first place oil was first discovered in commercial quantity in Nigeria. This kingdom has helped to build cities across Nigeria. This kingdom has developed people and helped to build universities but as you can see that in terms of infrastructural development our kingdom has suffered unspeakable neglect. So please, when you get into office, don't forget Ogbia people by bringing development to our people.”