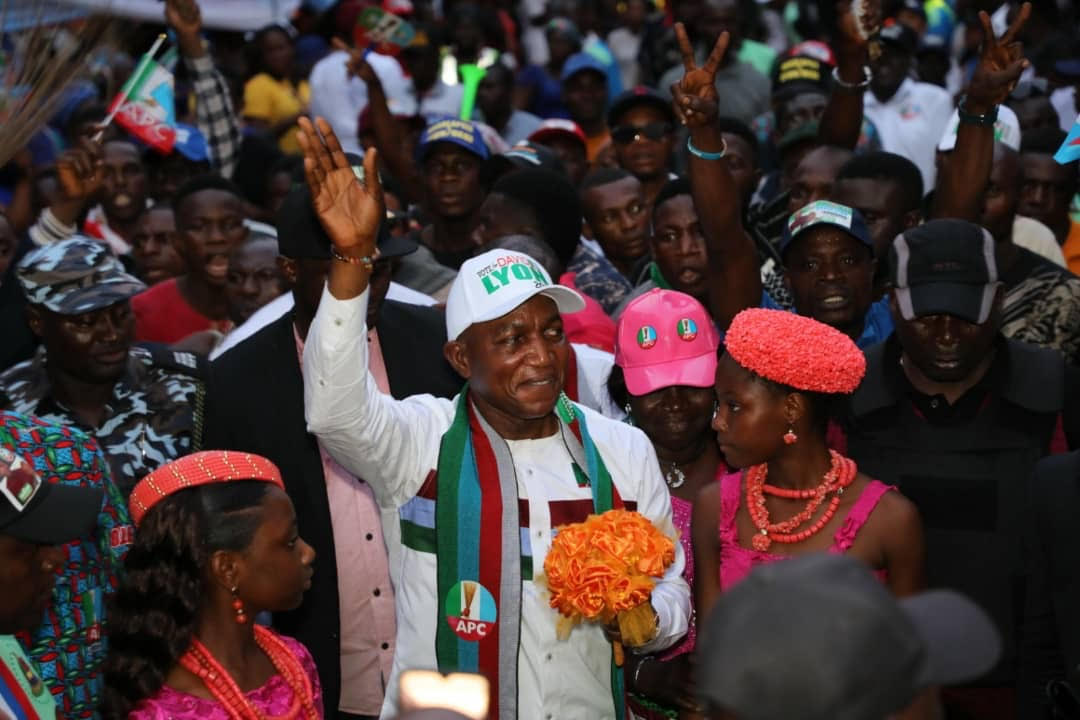 The people of Kolokuma/Opokuma Local Government Council in Bayelsa State, Tuesday, declared total support for the candidate of the All Progressives Congress (APC), Chief David Lyon. They said their son who is the candidate of the Peoples Democratic Party (PDP), Senator Douye Diri, was elected without any form of consultation with them.

Speaking on behalf of the people of the area in Sabageria during APC's governorship campaign rally, Alternate Director General of the APC Bayelsa State 2019 Governorship Campaign Council, Professor Seiyefa Brisibe, said the PDP deceived the people of Kolokuma/Opokuma during its last primary election that produced Senator Diri.

He pointed out that the area had an illustrious son they wanted as governorship candidate but the incumbent governor of the state, Hon. Henry Seriake Dickson, gave the PDP ticket to Diri without consulting with people of the area.

Explaining further, he said the PDP candidate does not protect the interest of the people of the area and therefore cannot attract any form of development to the people, just as they did not benefit from the Dickson’s government for close to eight years.

Addressing the mammoth crowd that turned out for the rally, the APC governorship candidate, Lyon, assured the people of the area that if voted into office come November 16, he would complete the Sabageria/Polako bridge project. The bridge has been abandoned for eight years.

David Lyon who was received by traditional rulers, elders, women and youths of Kolga, also promised to provide soft loans and grants for small and medium scale businesses women from the area, in a bid to move the people above the poverty line.

According to the APC candidate, "I am an Ijaw man like you, and I know your problems because they are the same problems I face everyday as a person. When I become governor, I assure you that I would work hard to solve your problems.

"First, I would complete the abandoned Polako/Sabageria bridge to connect you to Yenagoa City. I would build befitting schools, hospitals and roads to ease your challenges as a people.

"I will sand fill parts of Okoloba Community in order to ensure that the annual flood that renders you homeless and jobless as a people don't disturb you anymore. For our women, I will establish small-scale businesses for you. I will provide farm tools for farmers to sustain their means of livelihood.

Also speaking, Hon. Ndutimi Komonibo, the APC campaign coordinator for Kolokuma/Opokuma Local Government Council reiterated the fact that the PDP has tempted the people of Kolga to their limits to the point that the only option is to vote for the APC.

Komonibo declared, "That is why God has sent us a David to liberate our people from our enemies that don't want our progress. My people, you know that our people are very intelligent people. The governor, without consulting us, brought one of our sons as candidate.

"To me that is temptation. Are you ready to vote for that temptation? Our problem is that if Douye Diri becomes governor, he would become Dickson's stooge and we would continue to suffer as we suffered under Dickson's administration.

"So if you ask me between Douye and development which would I choose? I would choose development because the PDP has not and will never bring development to us."

The APC campaign train later went to Opukuma, Odi and Kaiama. At each point, highly enthusiastic supporters who endorsed the APC Governorship candidate met them. In turn, the APC team preached the message of a better Bayelsa for all.