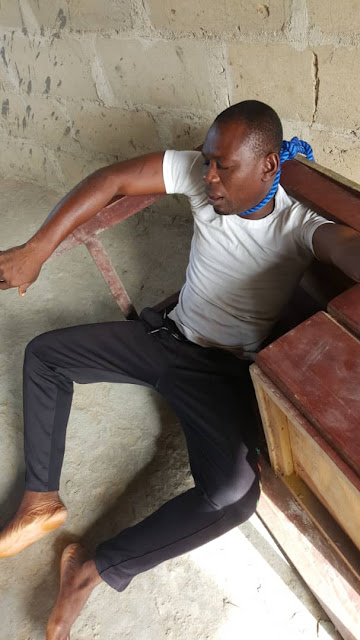 A supporter of Bayelsa state Governor-elect, Mr. Teidei Simon Oze has attempted to commit suicide over a threat by one Mr. Benjamin Abrakasa, a stalwart of the Peoples Democratic Party (PDP) in the state to take over his companies.

Mr. Abrakasa, a former Chairman of Petroleum Task Force in Bayelsa state is said to have given Oze an impossible deadline of December 31, 2019, for the payment of about N7.6m, or forfeit his companies to him.

An eye witness who accosted Oze midway on his suicide attempt quoted him to have said, "out of eleven million naira (11m) which I borrowed to pay N17m, a deal with interest of N7m to be paid.

"The N7m interest had been paid and the N3.4m of the N11m capital also paid but given a mandate to pay all N7.6m before the December 31, this year is worth taking one's live," he added.

On scrolling his mobile phone, it was revealed that at about 5:36:10 a.m on the 21st of November this year, Abrakasa sent a sms for a meeting and in that meeting, 31st of December was given as deadline for payment of the said amount or a takeover of both the gas station and an existing petrol station in Amassoma.

It will be recalled that on the December 17, 2017 Prophet Jeremiah Omoto Fufeyin had located Mr. Teide and pledged to donate the N11.8m as his contribution to pay his debt and both yet to reach Mr. Teide.

A Junior Pastor in charge of finance at the Mercy Land Deliverance Ministry Church, Pastor Promise (second name withheld), when contacted via the telephone confirmed that, the money donated to save the soul of Mr. Teidei Simon Oze actually had been contributed but details cannot be provided on phone interaction both on physical appearance.

"You are a journalist and journalists are mobile so if you want details of the donations that were made, please come to the Church thank you", Pastor Promise noted.

On reaching Mercy Land Deliverance Ministry, Pastor Promise rescheduled his appoinment with our Correspondent saying it was already late only for him to avoid taking calls the next day.

Meanwhile the former Chairman of Nembe local government area council, Mr. Benjamin Abrakasa told our Correspondent that Mr. Teidei had no right to have attempted suicide describing it as total madness.

"Ask him to show you the agreement and you will see that it has expired since two years ago.

"Someone like him did similar thing in the past, collected money with a petrol station along AIT Elebele road as a collateral and when couldn't pay left the petrol station".