Posted by CREEK NEWS WEEKLY Posted on 8:58 AM with 2 comments 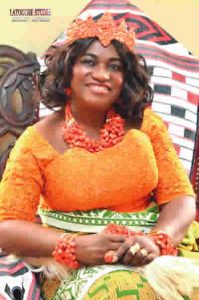 The Project Director General of the epoch marking event Comrade Orlando Dominic, in his opening remarks welcome all the personalities who came from far and near, stressing that is was well; concerned concept which was embarked four years ago. While stressing the crucial nature of peace in achieving desired result in any meaningful society. Also tasking youth in Bayelsa State and Nigeria at large to advocate peace, especially youths in Bayelsa State to shun violence.

In response after receiving the award and also answering questions from newsmen, Her Majesty Spiff thanked God Almighty for the great Award stressing that the Award will spur her to do more in societal development especially making peace through various methodologies, equally noting that no meaning development will take place without peacefully co-existence “Peace is Golden”.

While dedicating the unique Award to Brass Kingdom, the Royal Queens of Niger Delta Queens, and Rotary international.

The president of the Royal Queens with great number of Royal queens and Rotarians that stood by her in receiving the award.

Rt. Hon Isenah who was so excited while receiving the award as peace democrat said he was surprise but thanked God Almighty and moreso, appreciating the   management of the NGO
Attachments area